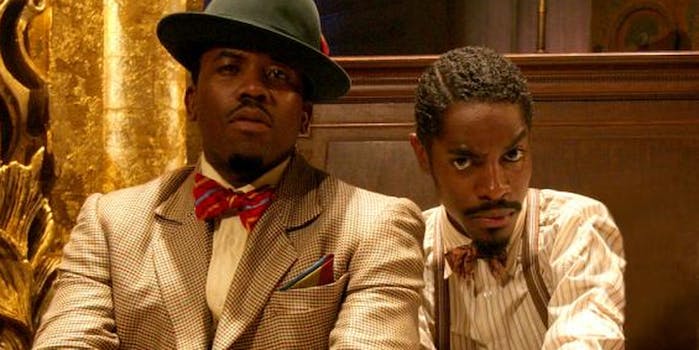 Why OutKast is the greatest rap group of all time

After a seven-year hiatus, OutKast is suddenly everywhere. The Atlanta-based hip-hop duo will reunite at Coachella and then go on an extensive summer and fall tour. There’s even been talk of recording new music.

It’s a tragedy that one in 10 Americans doesn’t believe that OutKast is the best hip-hop group of all time, or that there are enough confused bystanders to fill a single-serving Tumblr.

The case is straightforward: OutKast released the most good music. André 3000 and Big Boi’s total output batting average is immaculate. Their political edge goes toe to toe with N.W.A.’s bedrock angst and Public Enemy’s black consciousness. Their fundamentalist lyricism competes with the Wu-Tang Clan and Black Star. Their early, post-golden age earth tones match A Tribe Called Quest’s charisa, the red eyed-realism of the Geto Boys, and the fearless production whims of the Beastie Boys. They are as influential as Eric B. and Rakim—just listen to Kendrick Lamar’s penchant for running-up-the-stairs delivery and how Lamar warps his paragraphs by speeding up their vocal pitches. Think the “Aquemini” crumbs all over “Cartoon & Cereal’s” cummerbund.

Rap critic Andre Noz wrote that the best rap creates a world that you want to visit. Parliament Funkadelic imagined black people in space and the White House through bold futurism. André 3000 was more interested in welding the absurdist fiction of his regional raps with high concepts. Stankonia is a land from where all funky things come, but in that land there are strip clubs with girls addicted to cocaine and pregnant kids that botch abortions. There’s kids that were sleepover collaborators whom, as adults, fall into abusive relationships and overdose on needles.

What distinguishes André and Big Boi from the militant slam poets is their humor and romance. Whereas rap fans laughed at, say, Ghostface for complaining about the flavor of his protein shake, OutKast skits were acutely self-aware, cut-and-pasted conversations from their corner of Atlanta. The ‘hood isn’t all shadows—it’s staying up late to watch scrambled cable, eating gyros in the food court, crumbling some herb when the headlines become overpowering.

OutKast also went out of its way to highlight the gross injustices of lost, young, African-American women. Chicago reporter Jim DeRogatis was the journalist that brought you the R. Kelly trial. He still gets flack for attacking Kelly, and this is what he says is a big part of why: “Nobody matters less to our society than young black women. Nobody. They have any complaint about the way they are treated: They are ‘bitches, hos, and gold-diggers,’ plain and simple … It was young black girls and all of them settled. They settled because they felt they could get no justice whatsoever. They didn’t have a chance.”

I’ve thought about that recently while revisiting OutKast’s work. From the jarring acting on the experimental “Toilet Tisha,” to the mournful nostalgia of “Da Art of Storytellin’ (Part 1),” to “Call The Law” (from the grossly underrated Idlewild soundtrack—wherein a young Janelle Monae steals the show and is awarded moral superiority for being fed up with Big Boi’s vagrant lifestyle—OutKast humanized these people without any sort of moralist agenda. When they did lean on political fuel for message songs, they made chaotic masterpieces (“B.O.B.” really is the song of the decade, “Gasoline Dreams,” “The Whole World”) and understated gems (when Andre raps “This is for them ni**as working at the airport who got laid off” at the end of his verse on “The Whole World”).

Rap nerds get indignant about “new OutKast,” but a proper OutKast mix is not segued by early and latter days. It’s a line that is crucially divided between “singles” and “songs that are an unexplored underbelly to people that did not invest $15 on each of their releases in the ’90s.” For this tour, the dividing line will be the “Cruisin’ in the ATL” skit.

Oh, right. OutKast also has an unfair total points advantage when the topic is “hit singles.” I count at least 20 all-timers that strike like Zlatan Ibrahimović off a set piece. Songs that won useless Grammys and changed the world. Melodies that toddlers hum on repeat. Those are nice too.