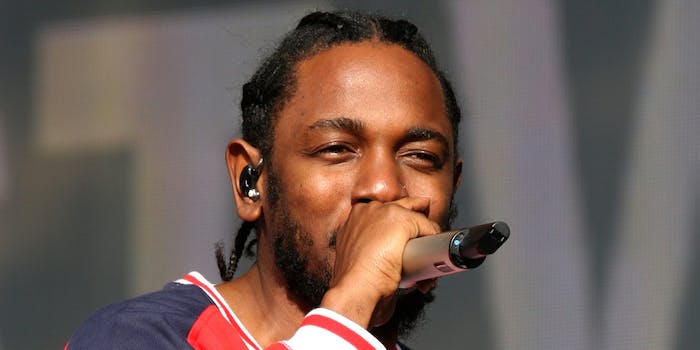 Kendrick Lamar’s ‘DAMN.’ is an epic statement, flame emoji and all.

Kendrick Lamar is not the best rapper alive, but very few seem to work harder than the rapper from Compton, California. On DAMN., his dense and epic new album, Lamar is a wordy chameleon, burning through styles and lyrics like arcade quarters.

There are two Lamars dueling on DAMN.—the 29-year-old American who deftly understands his young nation’s identity crisis, acting as its pent-up fury, and the divine healer who plays philosopher and grapples with his faith’s ironclad tenets—a tension that’s been building for years. On 2012’s blistering major label debut good kid, m.A.A.d. city, Lamar proved to be a jaw-dropping storyteller who built a vivid world of class struggle and gang tussles, while 2015’s To Pimp a Butterfly reveled in the heritage of subversive, black music.

On DAMN., which beamed onto streaming music services Thursday night, Lamar’s hyper-aware self-mythologizing threatens to devalue his gifts as a vibrant performer. He takes on so many roles and ideas that listening to the album in one sitting is exhausting.

Lamar becomes the toxically masculine id of the fans who text about his work in superlatives adorned by flame emoji—but elsewhere he’s a concerned romantic, for example. He’s a paranoid philosopher rapping about The Matrix and I Am Legend with dated imagery, but then he’s a community activist. He’ll borrow lines and styles from Juvenile, Jay Z, and Andre 3000 because he’s a studious rap fan eager to honor the legacy, but then he’ll rhyme with evocative wit about his friends and mentors.

Lamar can’t escape the impulse to appease record store puritans on DAMN. When he raps “Mr. One Through Five, that’s the only logic / Fake my death, go to Cuba, that’s the only option” on “ELEMENT.”, he’s writing to the peanut gallery of blogs like Nah Right and 2 Dope Boyz that hailed his ascent circa 2010. The aforementioned lyric riffs on a Tupac Shakur conspiracy theory. It also tries to end the debate that Lamar is one of the five best rappers in history by positing that he’s actually all five of the best rappers in history, which is a joke from Chappelle’s Show.

Lamar is a culture nerd who can pay homage to his faves with deft twists. He’s a proud disciple of the blockbuster CD era and appears to follow suit here with a 14-song blueprint, an apparent nod to Jay Z’s best albums. When he plays genre ambassador, however, he does poorly.

The rampant martyr imagery begins on album intro “BLOOD.” and bookends DAMN. The skit finds Lamar helping a blind woman, struggling to walk in public, only to be shot and apparently killed by her. After the final song “DUCKWORTH.”, the album spins backward and returns to the “I was taking a walk the other day” opening monologue. I like this reading of it from a commenter who annotated the lyrics on Genius:

Kendrick could be referencing Oedipus’ blinding.

An analysis of Oedipus’ blindness suggests, “blindness has in many myths represented a lack of power – in punishment and defeat”. Kendrick could be suggesting that he is protecting those that have no power (since they have been ignored by those in power).

It’s some gnarly, circle-of-life shit to be sure. This is fandom rap for people who want to unspool coded lyrics on Reddit. Hell, for a solid two days, die-hards were certain that Lamar would rise again and release a companion album called NATION. ahead of Easter Sunday. But if you want to don a foil hat while you listen to DAMN., just remember that what makes this album good are its visceral thrills.

Rihanna collaboration and possible song of the summer “LOYALTY.” is the rush of pop. Tiffith and Terrace Martin arrange a soaring, 24-bit wave of G-funk, on which Rihanna continues her streak of being a cold-blooded mercenary who sings the best guest hooks. “DUCKWORTH.” is Lamar in his most spellbinding pocket, rapping in curt cadences about how his dad was almost murdered by Lamar’s manager. It’s a market-fresh catch: Little Brother alum 9th Wonder found the song’s soul sample from Ted Taylor’s 1978 gem “Be Ever Wonderful” and warbled it with perfect drums and loops.

The seven-minute “FEAR.” outlines the developmental pains of Lamar’s childhood by writing from the perspective of his mom, chastising boyhood Lamar for scuffing up new shoes or complaining about food stamps. With artful detail, Lamar also spells out the everyday walkthroughs (buying weed at the apartment complex, miscalculating a friend’s loyalty) that routinely threaten his life. He’s a peer here, perfectly channeling your anxiety. His fluidity with cinematic dialogue stuns, even on throwaway lines like “I’m like an exit away” from “LOVE.”

But Lamar is not the best rapper working, and you can tell it gets to him. Hip-hop in 2017 is more about vocalists and songwriters, and less about tongue-twisting writing. Sending warning shots to the industry by brandishing your pace and vocabulary is a dated game, one Lamar’s  rivals aren’t playing. It would have been great fun to hear him square off against Eminem’s platinum populism or Lil Wayne’s codeine bender of freestyles. Today the world streams Drake’s effortless charisma billions of times on Spotify. Future puts out lived-in, nonstop trap jams with sharper edges and regional identity. Chance the Rapper is a better youth pastor, manic in wordplay and boundless in optimism.

Even still, there’s plenty on DAMN. to obsess over, like the way 50-year-old DJ Kid Capri plays hype man on it, a sort of bridge to the ‘90s that shaped Lamar’s hip-hop ambition. It’s a learned, experiential flourish from Lamar that provides just the right tinge of heritage. If our savior was roaming through the desert on Butterfly, conferencing with kings, he’s come home with an album we won’t forget.