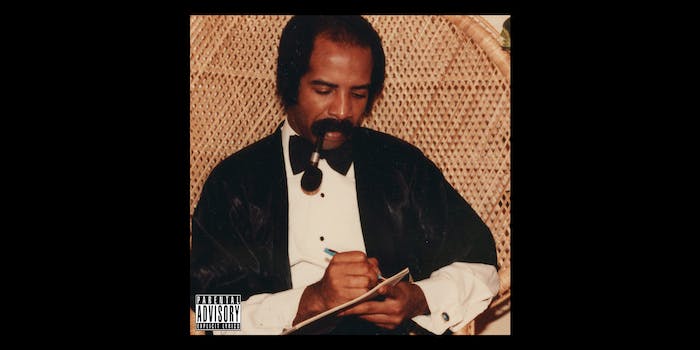 The project features some of the most essential songs of his career—if you can get past all the co-authors.

On Drake‘s smoldering new record, More Life, which hit the internet on Saturday, the Midas touch rapper offers some of the most essential songs of his career. But how much artistic value is there in crafting a good Spotify session?

The album was offered to the public as a “playlist,” a bloated, mood-setting 22-song bundle for steady streaming. You can fill out Excel spreadsheets to More Life. Cynics will note the shrewd business strategy, which is apparently a reaction to the fact that Billboard counts streams toward its charts these days. Just this year, Billboard added exclusive Pandora data to its formula for determining its Hot 100. What a time to be a pop record.

Within this evolving blueprint for mainstream success, however, Drake has lorded over a top-to-bottom compelling offering from his OVO label. Whereas Rick Ross is rapping to the American middle class on last week’s Better You Than Me—griping about cable news, diabetes, and taxes—Drake’s eyes are wide open, gathering sonic nugs from the world over. There’s Caribbean dance hall, British grime, nods to Africa. Songs like “4422,” from the taxing London singer Sampha, have gravity and scope. (Sampha otherwise channeled Dido and James Blunt for his snoozer solo debut, last month’s Process.)

In Harry Potter terms, Drake is a Slytherin: cunning, ambitious, resourceful, and willing to swallow whole the work of up-and-comers like D.R.A.M. if it means “Hotline Bling” is the end product. He snakes some underground sauce here too, most glaringly XXXTENTACION’s “Look At Me,” which the New York Times flagged.

But about that resourcefulness: The 80-minute album features precisely two tracks that didn’t enlist a co-writer. One of those is pure R&B, the sparse and downtempo “Nothings Into Somethings.” Presumably, Drake wrote his own verses on “Sacrifices,” “Ice Melts,” and “Portland”—all collaborations that feature Quavo, Travis Scott, 2 Chainz, and Young Thug—but he’s a neutral flavor on someone else’s entrée.

On Frank Ocean‘s generation-defining Blonde, Andre 3000 took veiled shots at Drake for all the ghostwriters on staff: “I was under the impression that everyone wrote they own verses… I’m humming and whistling to those not deserving.”

Pop records have always been a factory of collaborative assembly, but it’s not a cranky sentiment to expect rappers—not producers who rap, like Kanye West—to offer original lyrics and performances. On the aforementioned “Gyalchester,” which is a fine rap song you barely notice, Drake is declaring his place in hip-hop mythology: “I know I said I’m top five, but I’m top two.”

But maybe he’s on to something: Every Drake project since 2009 has been an enormous success filled with at least six great rap songs. More importantly, Drake has been rap’s leading art director since he appropriated DJ Screw on So Far Gone, then teamed up with Francis and the Lights for the major label debut. The man has the sort of internet-era taste that comes from a lifetime of sampling. In that way, More Life is Drake at his most brilliant.

Not everything lands. Protege PARTYNEXTDOOR drones on for six damn minutes during the most vital and blood-pumping stretch of the mix. Grime rapper Giggs lacks the charisma to justify two extended pop-ins. But Drake also gets two indomitable guest appearances from Young Thug, among the most inventive and essential voices in rap today; “Ice Melts” runs on Thugger’s breathtakingly beautiful hook, and on “Sacrifices” he rhymes “monkey” with “Jumanji” like only he can.

For Drake’s part, “Passionfruit” is the early winner. The house-fueled, Nana Rogues-helmed ballad is nearly five minutes long and I can’t get enough of its apex Drake power: Its mournful pleading and digital template sound like he’s singing to his screen, hoping the woman who owns that “iPhone 5S with a cracked screen” he shouts out on “Portland” hears the plea. The rest of the world will have to do.