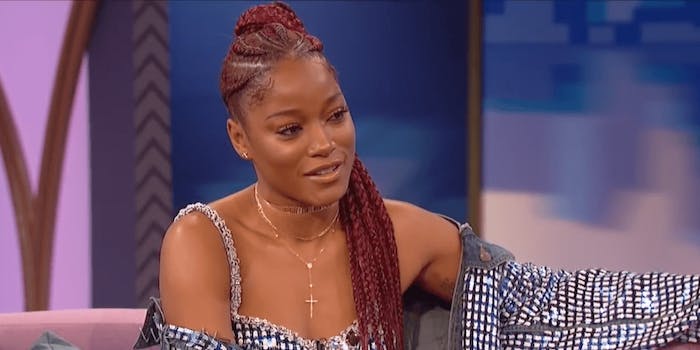 Williams had asked about Palmer's conflict with Trey Songz.

An old Wendy Williams interview with Keke Palmer has resurfaced. Fans are applauding Palmer’s response to Williams, who had asked her about her conflict with Trey Songz.

In 2017, Palmer accused Songz, whose real name is Tremaine Neverson, of featuring her in the music video for “Pick Up the Phone” without her consent. Palmer says she was secretly filmed for the video, and Songz tried to intimidate her into appearing in the video.

Williams asked Palmer about the conflict in the interview and asked Palmer to explain what happened in her own words. Palmer didn’t explain much, because Williams had already talked about the situation on her show.

“I would have loved to turn on your show, and saw you be a little bit more compassionate and a little less accusatory,” Palmer said.

Williams said she couldn’t be more compassionate, and Palmer asked why.

“The gag is, you wasn’t there,” Palmer said.

Williams pointed out that singers will film music videos at parties to save money, but Palmer questioned, “Is that right?”

“It’s normalized, and that’s my problem,” Palmer said. “Forget about what you say to me, the thing is we’re then telling girls it’s OK for them to be in weird and awkward and potentially sexually harassing environments, and they should endure it and not say nothing about it. That’s why I said something about it, because look, it happens to me too. It happens to all of us. Just because I’m in Hollywood doesn’t mean we all as women endure that.”

Williams admitted she didn’t think it was “right” to do that but still didn’t understand Palmer’s frustration. Palmer told Williams, “We have to start saying no when things don’t feel right” and Williams interjected, “But why didn’t you just leave?”

“Because I was nervous,” Palmer responded. “Honestly, you guys. Think about your first time that you were in a situation where someone challenged you sexually. You don’t know how to act. And it was very, very nerve-wracking. You know how it is. You know. You’re a woman of power. How many times have you been tested? In situations of how you can stand on your own and not fall at the hands of someone else.”

Williams said she was “the girl who would always leave.”

“And I did leave,” Palmer responded. “But I mean if I hid in the closet for a couple seconds what the hell.”

Fans are sharing their admiration for Palmer’s calm, collected, and wise responses to Williams’s questions.

“I aspire to be this emotionally mature. Keke really spoke up for herself without getting angry or frustrted when Wendy was not seeing from her perspective,” Twitter user @toniromiti wrote.

I aspire to be this emotionally mature. KeKe really spoke up for herself with out getting angry or frustrated when Wendy was not seeing from her perspective. And that is something I suck at. She’s so fire. https://t.co/Gq7AxK7SHf

And the LOUDEST moments were Wendy’s face when Keke says, “You’re a woman in power.” https://t.co/4sNz4laF6o

Some reminded young women that just because a situation is normalized, it doesn’t mean it’s right or that they should put up with it if they’re uncomfortable.

Bringing this back for the college girls on my timeline. If you know or don’t know the feeling referenced in this video, I’m telling you it’s important to understand that just because things are “normalized” it doesn’t always mean it’s right. https://t.co/p2mgUQSJfW

“The gag is you wasn’t there” should be the response to each person that feels the need to invalidate/undermine someone’s experience. https://t.co/ZmFKIwoNKG

Palmer posted her side of the story on social media, took legal action, and the video was eventually taken down. Songz is now being sued for sexual assault by an anonymous woman in Georgia after a previous lawsuit for domestic battery was dropped.