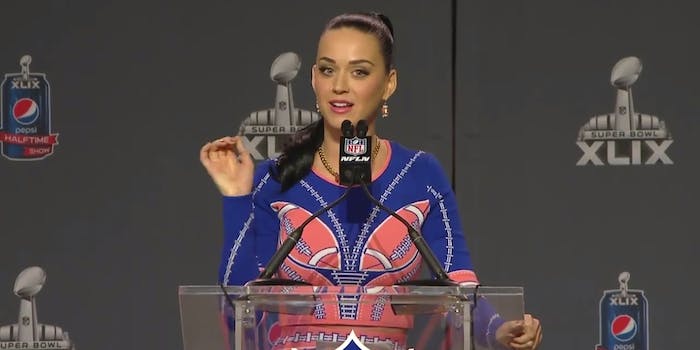 There have been quite a number of controversies leading up to this year’s Super Bowl. First, it was the New England Patriots and #deflategate that took over sports headlines. Then, it was the Seattle Seahawks‘ turn in the spotlight as Marshawn Lynch got contentious with reporters on media day by repeatedly stating, “I’m just here so I won’t get fined.”

But never one to miss a good controversy, Katy Perry decided to jump into the fray on Thursday during a press conference for the big game. When a reporter from E! posed a question to Perry about her love life the halftime headliner defaulted to “Beast Mode” not once but twice. As you can imagine, the results were priceless.

But don’t worry, Seahawks fans. Perry ribbed both teams evenly as she rolled out the requisite #deflategate jokes.

Leave it to Katy Perry to define a whole new level of trolling.