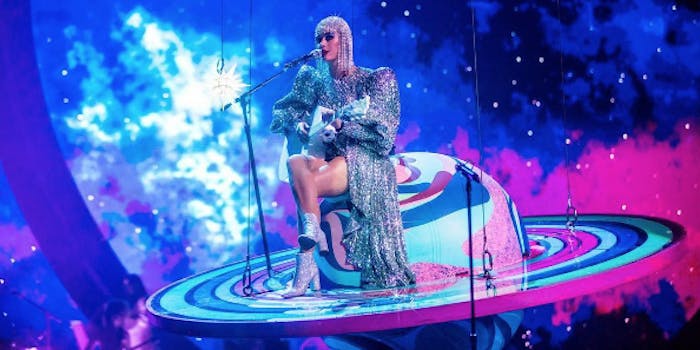 Katy Perry gets stuck mid-air on planet prop during concert

'I know I’m kind of a space cadet, but actually, this thing is stuck.'

Katy Perry got stranded mid-air during a performance this week and needed to crowd-surf her way to safety after an apparent mechanical issue with her floating stage.

Every night so far on her Witness World Tour, Perry has sat down on a giant foam model of the planet Saturn and strummed her acoustic guitar for a couple of her quieter songs. The planet is attached to cables and does a horseshoe loop around the entire stadium—giving fans way up in the stands a chance to snap a pic of the pop star. But at Perry’s Nashville show this week, there was a slight hiccup when Saturn suddenly stopped its rotation, stranding the 32-year-old singer above the audience.

According to Us Weekly, Perry didn’t miss a beat, cracking jokes on the fly while her team figured out what to do.

“This is the first time I’ve been stuck in space,” the Grammy nominee said. “I know I’m kind of a space cadet, but actually, this thing is stuck. What should I do? Should I tell some jokes, should I tell some stories, should I just sing another song? You’d better put your phones up, it’s a YouTube moment!”

Katy’s planet got stuck so they had to clear everyone beneath her so she could land & she was SO CUTE @katyperry #WitnessTheTour #Nashville pic.twitter.com/qmaoEOaYM5

Eventually, the planet slowly lowered toward the stadium floor. Once it had gotten as close to the crowd as it could without bumping into audience members, Perry dove off the planet and crowd-surfed to safety.

“I guess I’m just going to have to get down and walk amongst my people,” the “Chained to the Rhythm” singer quipped before taking the leap.

And for all the conspiracy theorists out there, one fan on Twitter couldn’t help but point out that the malfunction happened in longstanding-Perry-grudge-holder Taylor Swift‘s adopted hometown.