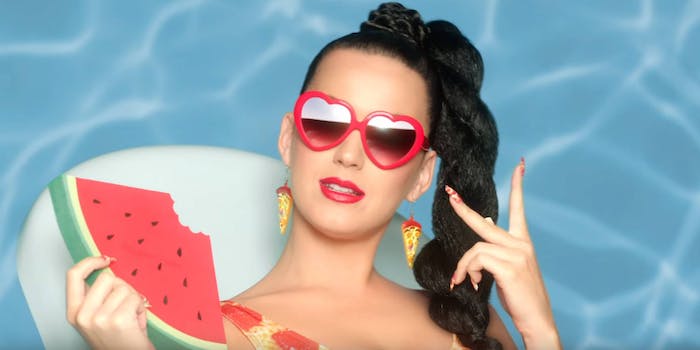 Katy Perry‘s new single is called “Bon Appétit,” and to get fans excited before its release, the singer is challenging them to follow her World’s Best Cherry Pie recipe in exchange for “a surprise.” Perry shared the instructions Monday, and at the very least it seems to produce a tasty dessert:

Bake me a pie and you may get a surprise 😉🍒 pic.twitter.com/Q35yejMt4Q

Most of the instructions are standard, but others, like “This pie is gonna hit that sweet tooth, boy” sound like potential lyrics. The singer teased the song on Snapchat back in March, coincidentally around Pi Day (3/14), but full audio hasn’t been made available. Still, with the recipe in hand and enough clues to know what might catch Perry’s eye, fans have been baking up a storm and tweeting the results at her:

Ehy @katyperry! Look at this 🍒cherry pie🍰 that I made with love for you!❤
And now, I want the surprise!😍 pic.twitter.com/MPmeueGemF

@katyperry I spent all day making you a pie! I hope you like it! #BonAppetit #BonAppetitIsComing #KP4 @kpcollections pic.twitter.com/9RwcYEdDwq

@katyperry okay so you are ignoring my little pie made with all my love… #bonappetit #BonAppetitcoming pic.twitter.com/rNAequ9cT3

The best one might be this pie from Ryan, though, that asks the question on every fan’s mind: Where’s the album?

Now for that surprise…