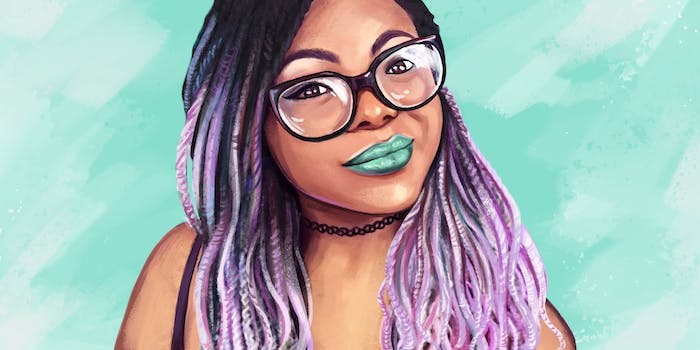 #WCW Kat Blaque is the sobering conscience we need

From YouTube to MTV, Blaque's unpacking these trying times.

Kat Blaque doesn’t stay on the sidelines when it comes to injustice.

The blogger-turned-vlogger started her YouTube channel in 2010 as a space to critique depictions of gender and race across culture. It was during this time, while she was studying character animation at the California Institute of the Arts, that Blaque began her gender transition. After graduating in 2012, she changed career paths and has since been making a name for herself as a writer, focusing primarily on the intersection between race and gender.

Black, female, transgender, and curvy, Blaque uses the experiences of her intersecting identities to advocate for the equality in her communities.

For the past year, Blaque has shifted her videos from an educational perspective to providing entertaining criticism. Following President Trump’s controversial bathroom ruling, Blaque used Facebook Live and her YouTube channel to open up about her experiences going out of her way to avoid public restrooms for fear of safety.

She uses her channel as a place to both build community and to educate people about the effects of privilege. Don’t understand what white privilege is? Watch her video on checking your privilege. Interested in conversations about anti-feminist females or veganism or why for a period of time everyone was putting a safety pin as their profile picture? Blaque’s social commentary sets a foundation for viewers to continue learning and starting conversations of their own.

Her Sunday videos, titled “True Tea,” are a mix of viewer questions and current events, such as her recent unpacking of the Milo Yiannopoulos scandal. Her nuanced views have continued to gain notice both on YouTube and beyond with shout outs from Everyday Feminist, BuzzFeed, Huffington Post, and appearances on MTV and MTV News.

Outside of YouTube, Blaque continues to pursue art and illustration in both freelance and through her store on Society6.

“[T]he way in which [social and racial commentary] impacts my artwork is that I recognize how often my default would be to draw white characters,” Blaque told the Tempest. “I try now to have my default be a black person. One of the things that I would really like to do when I get the chance is to work on a bunch of beautiful black fashion illustrations. I love the aesthetic of a lot of fashion illustration but very little of it celebrates blackness or celebrates black fashion. So I would love to do a series where I just have a bunch of really beautiful black women in different fashions in different formats.”

Most notable about Blaque is her undying fight for what is right. It’s inspiring and contagious. Her videos have taken conversations previously reserved for close friends and pushed them into the public space. And through her influence on YouTube and beyond, Blaque is making us all more aware and through example: She shows us the power of our own voice.