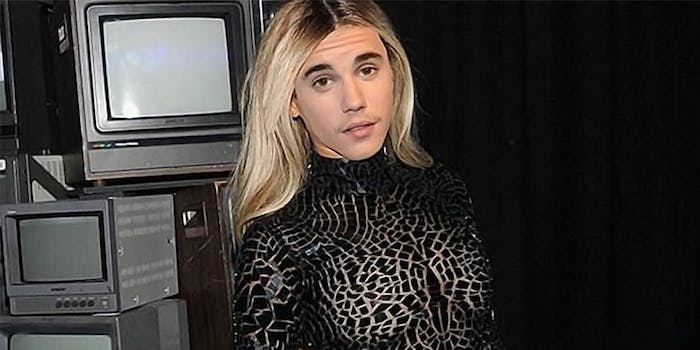 Since returning to Instagram in February 2017, Justin Bieber has been no stranger to antics on the platform. When he canceled 14 dates on a tour in August, he opened up about it by screengrabbing a note and posting his thoughts.

As he’s reportedly evolved into a man of faith though, he’s left behind the frat house-style pranks of excess and is instead embracing his weird sensibilities—like on Wednesday when he posted a weird-ass Photoshop of his face on Beyoncé’s body.

The photo compiled 3.8 million IG hearts and 125,000 comments in 10 hours, and the joke isn’t funny or even an actual joke. It doesn’t seem to tease any upcoming product or serve as a commentary on a broader issue. It’s just the Biebs’ face on Bey’s body. But like all great expressionist art, it exists devoid of influence and in a vacuum.

Write it off if you want, but he’s suffered enough trauma on the platform—when ex Selena Gomez’s Instagram was hacked in August, her account uploaded Bieber nudes. So perhaps he feels now is the time to do what he wants, and apparently what he wants to do is participate in an outdated gag where a man dresses up as a woman for laughs because a man being feminine is funny. Or, maybe, he just would like to get as much attention as Beyoncé.

Speaking of Bey, over the weekend, Bieber hung out at Coachella where he led a prayer, danced with no shoes, and punched a man who reportedly choked a woman.