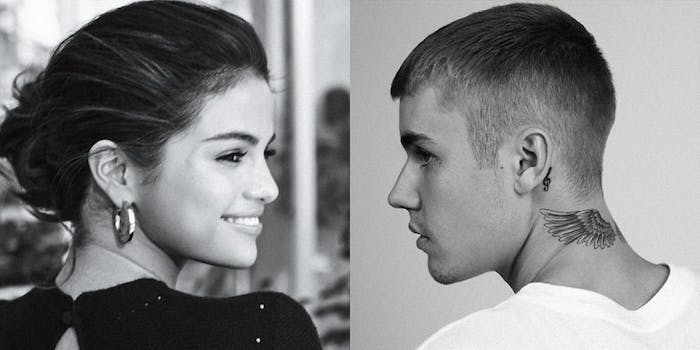 The hackers left their calling cards on the post.

Three Instagram accounts, islahgang, BZLL, and Cal695, were tagged in the caption of the nude photo, which claimed, “we run da scene.” However, all three accounts have since been suspended from Instagram.

On Twitter, user Cal695 tweeted that they had been banned from an unnamed platform for the fifth time, and also shared a tweet from singer Jacob Sartorius, which said that he had been hacked on Instagram. It’s unclear if Cal695 on Twitter is associated with the same username on Instagram. A Twitter account for user islahgang has also been suspended.

Variety confirmed Gomez was the victim of a hack. Her account went offline, was re-secured, and went back up minutes later with the photos of Bieber removed.

The nude photos of Bieber came were originally published by the New York Daily News in 2015, and were taken while the singer was on vacation in Bora Bora. At the time, Bieber said the photos, which were secretly taken of him from a far distance, made him feel “super violated.”

Gomez and Bieber have dated on and off since 2011. With more than 125 million followers, Gomez holds the most-followed Instagram account in the world.