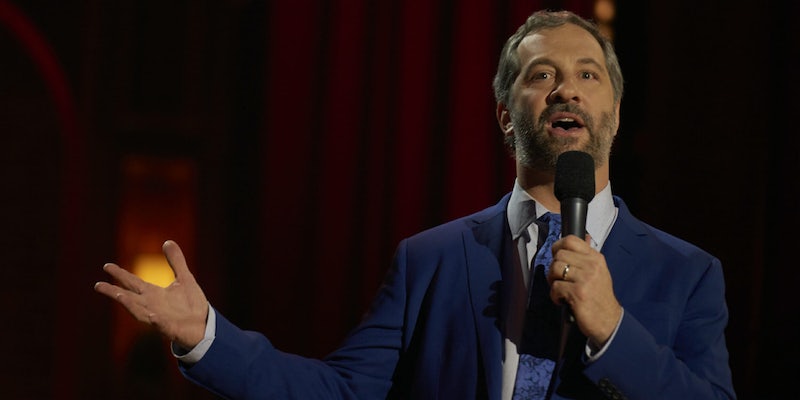 Judd Apatow tries to make fun of himself in ‘The Return’

Sure, Judd Apatow can call his debut standup special The Return.

Filmed in Montreal over the summer, The Return finds Apatow back onstage for the first time in 25 years, and he certainly has more experience to pull from. Apatow has that “Melissa McCarthy shitting money” now, so he can comfortably regale his audience with stories about desperately trying to make President Obama laugh. This is 50.

The Return is Apatow narrating his place in the comedy world; he’s a multi-hyphenate with clout and influence, so he throws Netflix a bone early on. In an advertorial bit about binging TV, he shouts out Narcos and promotes the show Love, on which he is a producer. He addresses one of the longstanding criticisms of the Apatow-verse: the “attractiveness gap” between his male and female characters. Well, he addresses it but doesn’t really offer much of a cultural critique. Instead, he looks to his audience and calls out the men who look like him. At one point he offers: “All guys are kind of ugly, and all women are kind of pretty.” It just hangs there.

But Apatow’s always known his audience looks like him. From Freaks and Geeks to This Is 40, Apatow has funneled parts of himself into on-screen personas that resonate with a certain strand of (often white, male) American experience. He’s also helped promote voices like Lena Dunham, for better or worse—most recently the latter. Fortunately, some of the special’s most interesting material comes from observations about his daughters and the worry her carries for their future, and living with “three ages of the same woman.”

There are some lulls, like when Apatow goes into a “bad at sex” bit and tries to put another spin on the difference between men and women’s orgasms, and a few egocentric recreations. There are also photos of him being rebuffed by Paul McCartney and throwing out an awkward pitch at a Mets game, both apparently meant to be self-deprecating looks at his level of fame. Apatow has also been vocal about his feelings toward Bill Cosby—and other abusers. The Cosby joke is something several male comics have attempted this year, with varying results. Apatow’s bit sails along until he indulges a bad Cosby impression. Maybe we don’t need those anymore. He tackles another accused predator, Donald Trump, and Apatow wonders how he survived the Access Hollywood tape, but also posits that Barron Trump might “save us.”

It’s an indulgent special, to be sure. After years of projecting himself into movies and TV shows, Apatow has worked his way backward into standup. He’s famous enough that he can poke fun at his fame, but he can also revise his history.