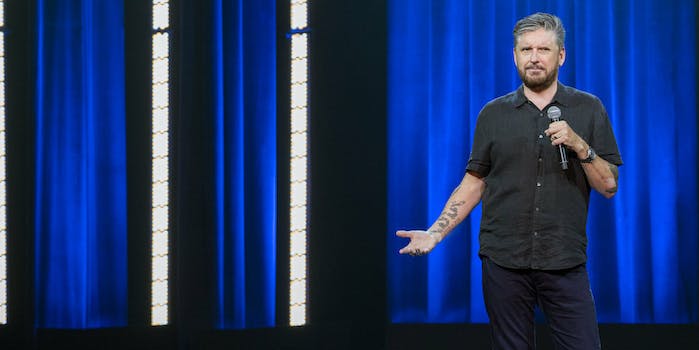 His Netflix special goes there, unfortunately.

By the time this review goes live, internet users across the globe will be frantically Googling Reese Witherspoon’s height.

Ferguson’s latest special is less a traditional standup set than a calculatedly off-the-cuff discussion about pubic hair groomed to resemble Hitler’s mustache; the dumbfounding eloquence of Japanese bathrooms (they have bidets, get over it); and navigating male adolescence with a Sears catalog and nylon bed sheets. The scruffy, sprightly 55-year-old sets expectations high early into his performance with a tantalizing promise: “If you’ve ever seen me before, you’ll know that you’re in for an evening of crushing disappointment.”

On one hand, Ferguson’s prediction is purposefully glib, as he’s far too seasoned of a performer to ever fail that spectacularly. But there’s a reason for his forecast: Over the course of an hour, he only tells one joke, because, in his words, “I get easily sidetracked.” Ferguson sets up that joke near the beginning of the hour, but it’s a long and winding road to the punchline.

Lucky for his audience, it’s a road worth traveling. Ferguson breezes through his material with an expert blend of feigned outrage and seductive charisma, the same formula that made him such a knockout for nearly a decade on The Late Late Show with Craig Ferguson—though he might not welcome the comparison. The former host, who left in 2014, throws gleeful jabs at his former employers and, in Tickle Fight’s best bit, tells an absurd story of a Late Late Show staffer who gets loaded on tequila at a Las Vegas breakfast buffet, steals a complimentary limousine, and eventually calls Ferguson to bail him out of jail.

“I couldn’t tell this story before now ‘cause it’s technically illegal,” he says smugly. “What’s CBS gonna do, fire me? It’s too late!”

Still, Ferguson insists he doesn’t regret his decision—with one exception. “When I heard Donald Trump was running for president, I was like, ‘Are you fucking kidding me?’” he exclaims. “That’s like when Dick Cheney shot his lawyer in the face! It’s just beautiful! I mean come on, that’s a gift. I used to have to work at monologues. Now, this fucker runs for president?!”

It’s a refreshing, niche angle from which to skewer the 45th president, and thankfully Trump scarcely appears for the remainder of the hour. Ferguson’s too busy racing through other topics, baiting the audience with bombshell statements that beg for further clarification. As far as titles go, Let Me Explain would’ve suited Ferguson’s latest endeavor far better, as he frequently uses the phrase as a device to hop from one story to the next.

In fact, Tickle Fight makes little sense at all as a title, as it fails to offer any insight into the contents of the special. Ferguson just returns to the phrase throughout the gig as he talks about some of his better-looking male friends and colleagues. His inflection and body language sell the bits, but it’s disappointing to hear such a high-functioning comedian run with the unsettling implication that homoerotic activity is a worthy punchline in and of itself.

This lackluster motif halts the momentum of Tickle Fight, as does a remarkably ill-conceived Bill Cosby joke which belongs squarely on the cutting-room floor. (“Before you know what’s happening, I wake up three days later in a shallow grave in Bogota with my fingers smelling like Bill Cosby,” goes the tone-deaf bit about binge-drinking.)

Ferguson often opts to steamroll through his more cringe-worthy moments—as evidenced by his more leering Late Late Show interviews with women—but he truly should have known better this time around. Mock incredulity only gets you so far when you’re joking about men who have been accused as serial sexual predators.

It’s a shame these moments exist because Tickle Fight otherwise blends razor-sharp humor and slice-of-life observations to great success. As for Ferguson’s one and only proper joke of the special? It’s a huge letdown, following the recent tradition of anticlimactic set closers from comedians who have proven they can do better.

Then again, he promised crushing disappointment at the beginning of Tickle Fight. With a bar that low, one can hardly say Ferguson didn’t deliver.