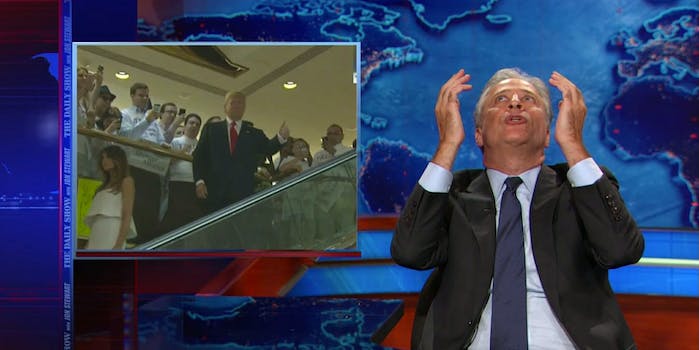 Screengrab via the Daily Show

It's a running joke that began years ago.

The term Fuckface Von Clownstick might not have been coined by Jon Stewart. But the former Daily Show host is certainly the one who brought it into the cultural lexicon and attached it to Donald Trump in 2013. On Thursday night, at a show with Dave Chappelle, he explained why.

It all started, Stewart said, when Trump wondered on Twitter why Stewart wasn’t using his real name of Jonathan Leibowitz and implied that the “totally overrated” Stewart shouldn’t back away from his Jewish heritage.

Jon Stewart @TheDailyShow is a total phony –he should cherish his past—not run from it.

If Jon Stewart is so above it all & legit, why did he change his name from Jonathan Leibowitz? He should be proud of his heritage!

So, Stewart shot back by calling the now-president Fuckface Von Clownstick on the Daily Show. On Thursday, Stewart called that Trump’s reference to his name a “white supremacist trope” and wondered why Trump was running away from his Von Clownstick heritage.

That wasn’t everything Stewart had to say about Trump on Thursday.

Clearly, Trump didn’t enjoy the moniker when it was unleashed on the world in 2013.

What’s funny about the name “F**kface Von Clownstick” — it was not coined by Jon Leibowitz– he stole it from some moron on twitter.

That led the Daily Show to tweet this in return.

We seem to have hit a Fuckface Von Nervestick.

Four years later, Stewart left the Daily Show, Trump is president, and white supremacy is still on the nation’s mind. But Stewart had some advice for the white nationalist movement.

“If you guys feel like you’re losing out, fucking work harder,” Stewart said. “If you’re a white supremacist, if you think you’re the master race, how come we’re all kicking your ass so easily?”