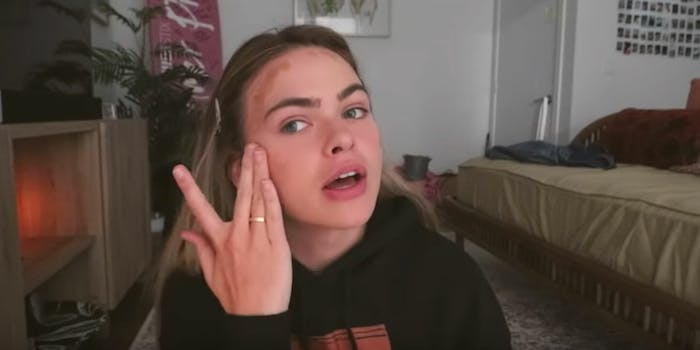 Summer Mckeen is not apologizing for her Nudestix collaboration.

A YouTube makeup artist is facing backlash for creating a makeup line that only works for people of her skin color or lighter. Summer Mckeen, who has more than 2 million followers on both YouTube and Instagram, excitedly announced her collaboration with Nudestix in a video uploaded on May 17.

“I’ve been working on this for a little bit,” Mckeen says, adding notes about the amount of thought she put into the making of the bag, which can’t be said for the thought that went into the diversity of her product.

Mckeen, 20, has been receiving lots of criticism from her followers, and comments were still pouring in this week.

“Girl this is lame… it’s $70 and also ONE SHADE? Are u kidding me? Why did you think this was a good idea?” wrote one user.

“This collection only has like two shades directed to people with lighter skin tones,” wrote another. “Where is the diversity at???”

Some recalled another incident where the Mckeen was criticized for her lack of understanding diversity. She faced backlash for the way she handled a collaboration with the Dote app, which sends influencers to Coachella.

“Very disappointed with how you handled the Dote situation and then continued to release a collab with one shade range,” wrote one user.

According to a video by the channel Spill Sesh, uploaded on Sunday in response to the drama with Mckeen’s makeup series, women of color who were sent to Coachella through Dote complained about discrimination and different treatment from their white counterparts.

In the video, Spill Sesh shared a photo of Mckeen’s apology message for the Dote incident.

“Regarding the issues having to do with diversity at Coachella, I wanted to acknowledge and apologize for any involvement I may have had to cause to cause discomfort to the women of color on this trip,” Mckeen reportedly wrote in an Instagram story.

But the apology rings hollow now that she’s followed up by making an entire makeup brand with literally nothing for anyone whose skin is darker than hers.

In a statement to BuzzFeed, Nudestix said even though its platform offers products for a range of skin tones, this line was “personal” to Mckeen and is made up of her “favorite shades and textures.”

“Unsubscribed already. You are so insensitive about the dote issue because you are a privileged white girl who gets anything they want. I’m so disappointed on how you handled this situation. Smh,” one commenter wrote on her YouTube video.

“Summer really said frick y’all who are tryna cancel me, imma cancel myself,” wrote another user, implying that the makeup artist might be facing a slew of unsubscribes on her channel.

As of Wednesday morning, Mckeen’s Instagram story was still proudly advertising the product. In a photo posted to Instagram on Tuesday, a user accused Mckeen of deleting her comment.

“Lmao u deleted my comment for pointing out the obvious. That u made a bronzer that wasn’t inclusive for all skin tones :/ Sorry to offend you but that’s jus criticism,” wrote user _.xashley._.x.

Because white privilege often equates to unchecked confidence, Mckeen stood her ground. “I understand what you’re saying for sure,” the YouTuber replied. “This makeup kit was just a few products that I liked. There’s a lot of different products and shades to choose from if you look on their website!”

But her fans and other concerned users are not letting the issue drop. They’re continuing to hold her accountable by commenting on all of her Instagram photos, reminding Mckeen that the year is 2019, and she can’t evade answers.