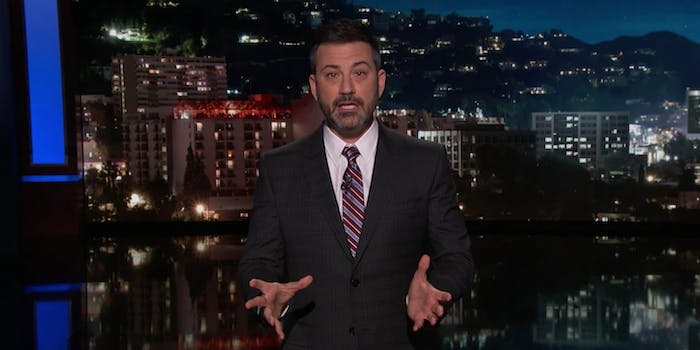 Jimmy Kimmel rips Trump a new one after Parkland shooting

‘You’ve literally done nothing. Actually, you’ve done worse than nothing.’

Jimmy Kimmel lashed out at President Donald Trump over mass school shootings in the U.S. during a tearful monologue.

Kimmel addressed the mass shooting in Parkland, Florida on Thursday’s show as he focused on Trump’s response in a televised speech. While Kimmel agreed with parts of Trump’s speech, Kimmel urged him to tell Congress to do something about it right now—and not later. As Kimmel noted, we haven’t even talked about other mass shootings that have happened because of the idea that it was “too soon.”

He also zeroed in on Trump’s characterization of Parkland as a mental health issue, demonstrating that even that’s something Trump made worse.

“You’ve literally done nothing. Actually, you’ve done worse than nothing,” Kimmel said. “You like to say this is a mental health issue but one of your very first acts as president, Mr. Trump, was to actually roll back the regulations that were designed to keep firearms out of the hands of the mentally ill. You did that. Your party voted to repeal the mandates on coverage for mental health.”

Kimmel has had enough of it, and while he knows that he probably won’t have everyone on his side he urged those who agreed with him to take a look at and contact their legislators who aren’t pushing for gun reform and vote them out of office.