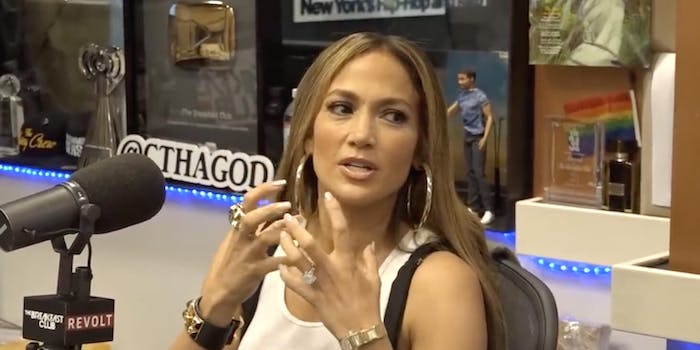 The 'Selena' and 'Hustlers' actress was taking no prisoners in 1998.

In even brutality, Jennifer Lopez can do no wrong.

A legendary Movieline interview from 1998 has resurfaced, with Lopez expressing some, ahem, interesting thoughts about herself, and some of her famous colleagues.

Jennifer Lopez was interviewed by Movieline in 1998 and THESE QUOTES ARE TO DIE FOR #KWEEN pic.twitter.com/ufnFGsDdgT

For context, Lopez had just completed (the good and awful) Anaconda and was coming off legendary biopic, Selena. High off of the incredible success and with a burgeoning singing career on the horizon, she was apparently feeling dangerous and talking recklessly.

“A lucky model who’s been given a lot of opportunities I just wish she would have done more with,” she says about actress Cameron Diaz. “She’s beautiful and has a great presence, though, and in My Best Friend’s Wedding, I thought, ‘When directed, she can be good.'”

She also goes in with an ax on Gwenyth Paltrow: “Tell me what she’s been in? I swear to God, I don’t remember anything she was in. Some people get hot by association. I heard more about her and Brad Pitt than I ever heard about her work.”

One of the best (and hilarious) passages relates to a forced Latina semi-rivalry between Lopez and Salma Hayek.

“She’s a sexy bombshell, and those are the kinds of roles she does,” Lopez said at the time. “I do all kinds of different things. It makes me laugh when she says she got offered Selena, which was an outright lie. If that’s what she does to get herself publicity, then that’s her thing. Columbia offered me the choice of Fools Rush In or Anaconda, but I chose the fun B-movie because the Fools script wasn’t strong enough.”

To note, Anaconda was nominated for virtually all of the Golden Raspberry awards, as arguably the worst film of 1997.

Talk of her upcoming Super Bowl performance, with Shakira, and a potential Academy Award nomination for her excellent performance in Hustlers has dominated timelines lately. However, this no-holds-barred interview should be minted in gold, as there will never be another like it.