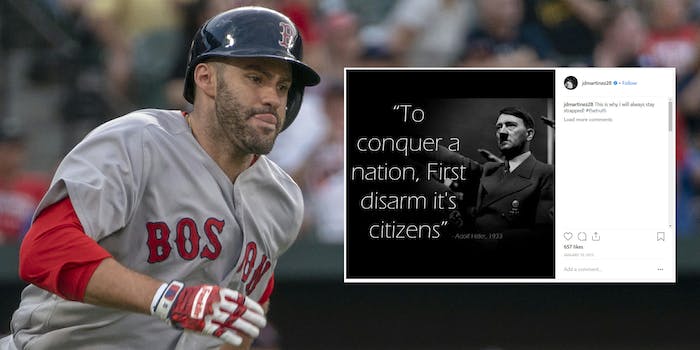 The meme is popular among Second Amendment supporters.

Boston Red Sox right fielder J.D. Martinez apologized on Tuesday for a five-year-old Instagram post: A familiar meme that laughs off gun control with a fake Adolf Hitler quote about disarming citizens. “To conquer a Nation, First disarm it’s [sic] citizens,” it reads, accompanied by a photo of the dictator giving a Nazi salute.

The quote has been a social media regular for just as long, popular with Second Amendment supporters.

Martinez, 31, wrote “This is why I always stay strapped! #thetruth” on the IG caption.

“At the time I posted that, the Second Amendment at the time was definitely a hot topic… The point of it wasn’t to offend anybody,” he told reporters on Tuesday, according to ESPN.

Martinez added that as a Cuban-American whose family fled a dictatorship, the meme resonated with him. He added that he remains a supporter of the Second Amendment and takes “pride” in it.

According to Snopes, there’s no documentation of Hitler saying the “disarm a nation” quote. It seems to be tethered to a translated and racist quote, however, in which the German leader warns against already-occupied people forming a militia: “The most foolish mistake we could possibly make would be to allow the subjugated races to possess arms.”