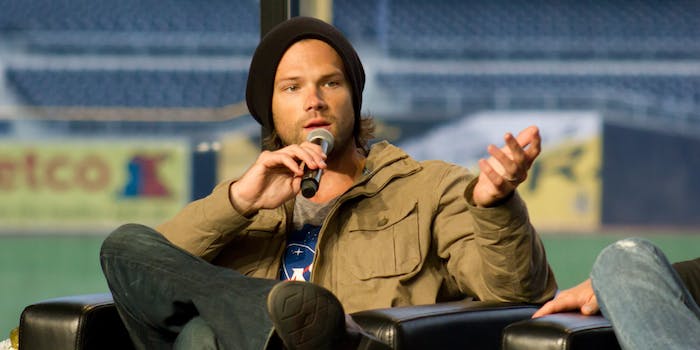 Jared Padalecki, best known for his roles in Gilmore Girls and Supernatural, was arrested for assaulting employees at his downtown Austin bar on Sunday.

The affidavit for his arrest states Padalecki was intoxicated when he got into a verbal argument with his employees at Stereotype, one of the two bars he owns in Austin, Texas. KXAN reports that the verbal altercation became physical when Padalecki went back into the bar after being escorted out and slapped his employee before “hitting him” in the upper lip. When police got involved, Padalecki had to be handcuffed to restrain him from touching officers and their body cameras, as well as “flashing a wad of cash” at them.

He was charged with a class A misdemeanor assault with injury, and his bond was set at $5,000, according to KXAN.

KVUE spoke with a patron who said Padalecki was “the antagonist, 100%.”

In addition to Stereotype, Padalecki is either owner or part-owner with his Supernatural co-star Jensen Ackles at two other businesses: The San Jac Saloon and The Family Business Brewing Company.

Despite the seriousness of allegations of assault against his own employee, fans were quick to both defend the actor with the hashtag #IStandWithJared and turn the incident into a joke.

@jarpad love you, you still have us behind you❤ pic.twitter.com/vZnHg67R6b

“Hey Jared. I just wanted to say that I wish you the best, & hope everything works out. Everyone has a f*ck up every now & then. You have family, friends, & fans who are behind you. We love you. #AlwaysKeepFighting,” one Twitter user wrote.

@jarpad Hey Jared. I just wanted to say that I wish you the best, & hope everything works out. Everyone has a f*ck up every now & then. You have family, friends, & fans who are behind you. We love you. #AlwaysKeepFighting pic.twitter.com/NKf9K8rYUX

Jared Padalecki gets drunk and arrested, and the Supernatural jokes did not disappoint pic.twitter.com/3tIzB9mza7

Jokes regarding the arrest reference Kansas’ “Carry On My Wayward Son,” which serves as Supernatural’s intro theme song. People also are joking about his character, Sam Winchester, who is often either possessed or impersonating an FBI agent.

Regardless, fans don’t have to fret. The shooting schedule for Supernatural’s final season will not be affected by Padalecki’s arrest, according to Comic Book.

The Market District bar has four stars on Yelp with nine reviews praising the atmosphere and staff. As of Monday evening, the Austin American-Statesman reports that Padalecki was not in the Travis County Jail, according to public records.