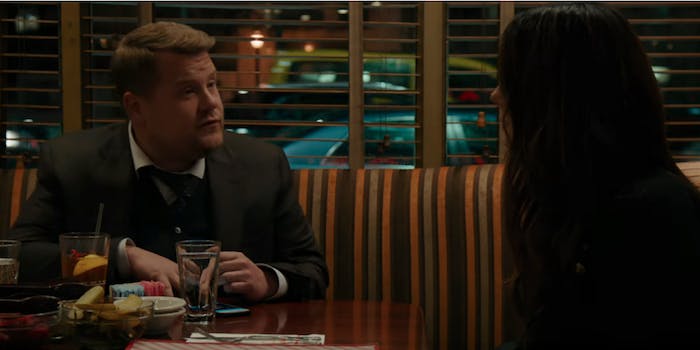 The trailer for the long-awaited, all-woman Ocean’s 8 movie debuted Tuesday morning, but one detail seems to have thrown everyone off: James Corden.

The late-night host shows up briefly in the trailer, and it was announced earlier this year that he would appear in the Ocean’s 11 spinoff as an insurance investigator, but it still rubbed a lot of people the wrong way. What’s he doing clogging up a trailer that’s supposed to showcase badass women like Rihanna and Awkwafina, especially after his bad Harvey Weinstein joke? How long are we going to have to see his face?

James Corden, showing up in all the films and ruining it for everyone. When did America elect him to be the new Jar Jar Binks?

I just found out Ocean’s 8 has James Corden in it. pic.twitter.com/0a4K7DvXIM

Watch the full trailer below, Corden and all:

And if Corden’s got you riled up, don’t forget Matt Damon is going to show up too.