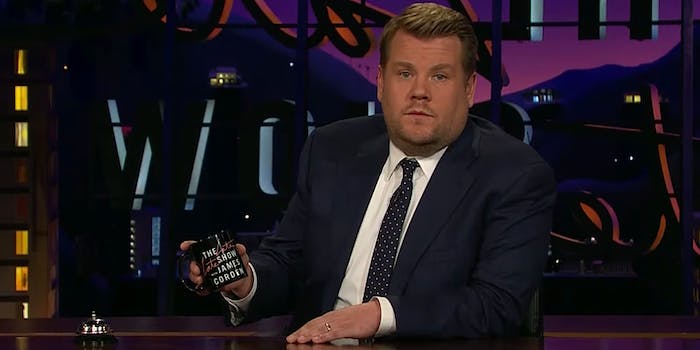 Screengrab via The Late Late Show with James Corden

He apologized in the wake of mounting backlash.

James Corden has apologized for the Harvey Weinstein joke he made over the weekend, after much of the internet met it with scorn.

He originally made the joke in his capacity as host of the annual AmfAR Gala Friday night, and it was immediately divisive. The audience laughed and groaned as he told them that the weather in L.A. was so beautiful Harvey Weinstein asked it “up to his hotel to give him a massage.”

“If you don’t like that joke, you should probably leave now,” Corden said before making a joke Weinstein being in hot water and how “women who watched him take a bath” know how bad that is.

In the wake of the dozens of accusations against Weinstein that have come out over the past week-and-a-half, there’s been a growing debate on how to comically address the scandal. Conservatives blasted late-night comedians for immediately ignoring the scandal—Jimmy Kimmel argued in his own defense that it broke right before his last show of the week then made a joke a few days later—while Saturday Night Live had to defend leaving Weinstein out of its first episode after the allegations came to light.

More hosts have covered it since then, including Seth Meyers, Samantha Bee, and John Oliver (more than once), and SNL devoted an entire sketch and part of “Weekend Update” to Weinstein. In the latter segment, Michael Che noted that “this is a tough spot for comedians because it’s so hard to make jokes about sexual assault.”

Corden’s joke, however, was seen by many (including Rose McGowan) to have gone too far for appearing to take a shot at many of Weinstein’s alleged victims. A couple days after he made the joke, Corden posted an apology over two tweets, saying he was attempting to take a jab at Weinstein and not Weinstein’s victims.

To be clear, sexual assault is no laughing matter. I was not trying to make light of Harvey’s inexcusable behavior, (1/2)

but to shame him, the abuser, not his victims. I am truly sorry for anyone offended, that was never my intention. (2/2)

But even Corden’s apology didn’t go over well. Apart from those who may have taken issue with the wording of the apology (or the fact that it leans into non-apology territory), some pointed out that Corden probably didn’t even write his own apology. The main piece of evidence that someone else wrote it? It’s all in the spelling.

James Corden is British and would spell this “behaviour” so nice try, PRs https://t.co/6KtHjqMCFq

James Corden is British. Why is he spelling 'behaviour' as 'behavior'? Wouldn't, perchance, have an American publicist would he? https://t.co/FKX8yM0eOj