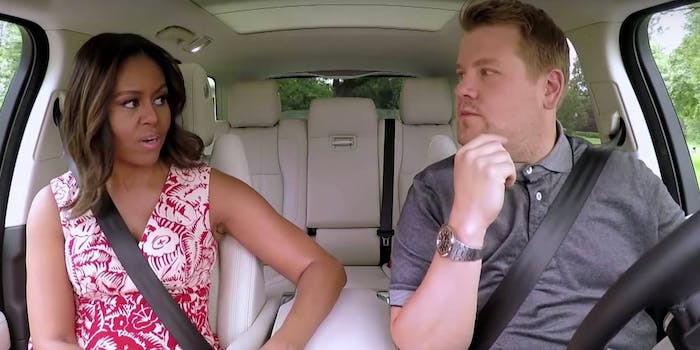 Celebrities in cars getting funky.

The wildly popular Carpool Karaoke segment of The Late Late Show with James Corden has long been rumored to get its own spinoff series, and it finally found a home: on Apple Music.

The 16-episode weekly series will reportedly keep the Late Late Show format, and Corden will serve as executive producer. A host is yet to be announced, and some fans on Twitter weren’t pleased that Corden will not be in the driver’s seat.

Carpool Karaoke has followed in the viral path of Lip Sync Battle, which was originally a segment on The Tonight Show before debuting on Spike in 2015. Coincidentally, Spike will be debuting a new Craig Robinson-hosted show, Caraoke Showdown, a merging of Carpool Karaoke and Cash Cab, in case the landscape wasn’t saturated enough.

Views on Corden’s clips have certainly eclipsed any other viral segments coming out of late night: The recent Michelle Obama-Missy Elliott video has more than 32 million views, and his segment with Adele has more than 119 million.

Apple Music has been attempting to enter the streaming series race, announcing earlier this year that it was producing an original series with Dr. Dre. This acquisition actually makes sense: Fans looking for music from the show won’t have to look far, or go to a competitor like Spotify.

A release date has not been set.