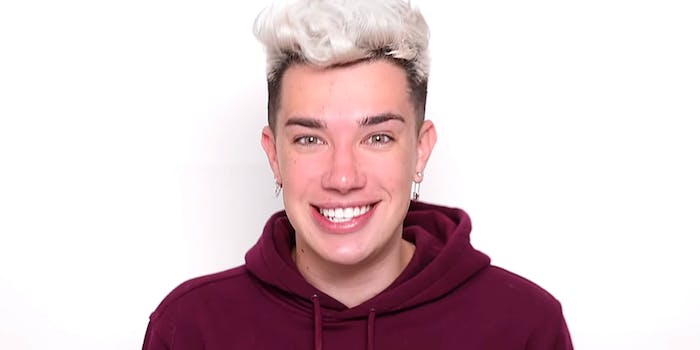 Charles is adamant that he loves his fans.

A few weeks after the Dobre Brothers faced heavy criticism to being indifferent and apathetic to a fan during a meet-and-greet, YouTube beauty vlogging star James Charles mocked them with a video that was basically a frame-for-frame replay.

Now, though, one of Charles’ own fans has accused him of being rude to those who love him. And Charles is awfully upset about it.

As reported by Drama Alert’s Keemstar on YouTube, a TikTok user named @bentruongg told the story of seeing Charles at an airport and asking for a photo with his female friend while Charles was working on his computer. Truong then pantomimed Charles typing at his computer without looking up at his surroundings to describe Charles’ supposed response to the request. According to Truong, Charles’ manager looked at Charles, looked at Truong and his friend, and said, “Uh, I think he’s a little busy right now.”

“He didn’t even have the decency to literally look up at us and at least say, ‘Hi’ or ‘Oh sorry, I’m busy,’” the TikTok user said.

In a statement to Keemstar, Charles said the incident didn’t happen the way it was depicted. Charles said he had already taken a photo with Truong, and as he worked at his laptop with his AirPods in, he said, “I guess the girl he was with started taking pictures from a far (sic) and finally got close and my manager politely told her that I was busy? I’m not even sure what happened because I did not see, clearly, but she never tapped me or waved or asked for an actual photo.”

Charles also said he’s never declined a request for a fan photo unless he was in the middle of eating a meal. “Even then I gladly say I’ll do it when I’m done,” Charles wrote. “It’s really annoying because a fan scandal is like the only one I HAVEN’T had and that’s because my followers are everything to me.”

Charles said he was frustrated because Truong’s video went viral and that even though Truong backtracked a little on his accusations and admitted Charles had his earbuds in, he left the original video up “to continue gaining traction.”

In a follow-up TikTok video, Truong—who has about 70,000 TikTok followers—said he didn’t understand how Charles, through his peripheral vision, wouldn’t have seen him even though he was working on a laptop at the time. “I know he saw me,” Truong said. “This was my experience. This is how I experienced it.”