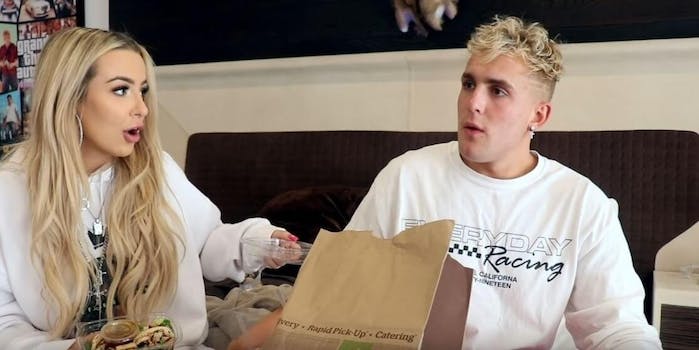 The number will blow you away.

Jake Paul and Tana Mongeau are so good at making money with their online shenanigans that even the breakup of their fake marriage is reportedly worth hundreds of millions of dollars in media exposure.

Since the whole point of their relationship was to build their brands and increase their exposure, it seems like the venture was a huge success for the YouTube stars.

Critical Mention, a media monitoring service, reported that that the last two months of the Paul/Mongeau marriage storyline earned 1,825 mentions via online, TV, and radio outlets (well, 1,826 now). The CEO and founder of Hollywood Branded, which uses branding to increase the value of its clients, told Insider that those mentions led to an audience reach of 7.5 billion, which is worth $605 million of media value.

That figure might seem hard to fathom, but Stacy Jones, Hollywood Branded’s CEO, said Mongeau’s string of high-profile romantic relationships, including Bella Thorne and Paul, have helped build her into an online superstar.

“While Tana is a comic and musician, it is her inclusion in those celebrity platforms that have opened the doors to being exposed to a new highly engaged audience who seem to like what she produces,” Jones told Insider.

Jones said Mongeau was also helped by her relationship with Paul, considering “the massive media coverage that followed both the rise and crash of their overnight romance.”

“The media coverage provided certainly helped Tana Mongeau become a more familiar name than it did Jake Paul, as his name is already incredibly saturated in the marketplace due to his years of content production,” Jones said.

Both seemingly benefitted, though.

From the time the two began “dating” last May until the end of their “relationship” in January, both YouTubers gained more than 1 million new subscribers, according to Social Blade. It’s likely that many of Paul’s new subscribers were already fans of Mongeau and vice versa. Paul now has 19.7 million YouTube subscribers, while Mongeau boasts 5.1 million.

Still, Mongeau isn’t seen as a safe bet to brands who might want to use her. And neither is Paul.

“Most brands just are not comfortable with risk, and both Tana and Jake are risky brand ambassadors,” Jones said.

This is also hardly the first time Paul used an apparent online relationship to grow his stature.

He was accused of using former girlfriend Erika Costell for page views after they broke up, and when the relationship between Paul’s ex-girlfriend Alissa Violet and her most recent boyfriend FaZe Banks ended in dramatic fashion, Paul used an old photo of him and Violet about to kiss to promote a new song.

“That?” Paul said with a laugh recently when the Daily Dot asked him about using Violet’s photo. “That’s just marketing.”

While the continued YouTube exposure is probably welcomed by Paul, who is now reportedly dating digital influencer Julia Rose, he’s been adamant that he wants to move away from the platform and continue his boxing and other endeavors that will produce plenty of money for him.

“YouTube will always be a part of my life,” Paul told the Daily Dot. “It’s just not as exciting anymore. Me and my brother both started that four years ago and we became the best at it and changed the culture for the rest of YouTube history.”

But for now, YouTube—or at least the exposure from being a YouTuber—continues to be a valuable commodity for Paul and his ex-“wife.”