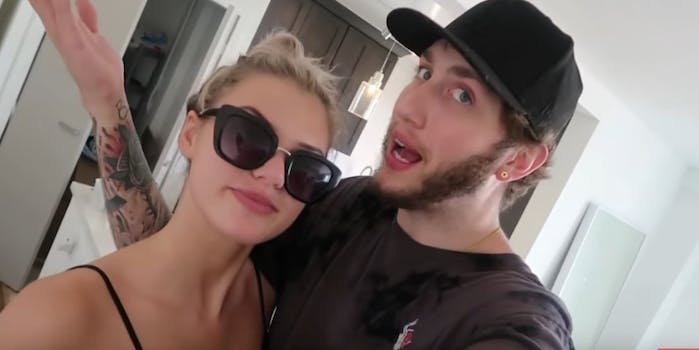 Alissa Violet says FaZe Banks cheated on her, was abusive

In a late-night tweetstorm, she also said he got violent, breaking eight of her phones and smashing a car windshield.

YouTube power couple Alissa Violet and FaZe Banks broke up several months ago, and on Sunday night, Violet explained why: She caught him cheating on her in the house they shared while she was sleeping in another room. And after that revelation on Twitter, she engaged in an angry diatribe in which she said she had footage of his apparent deceit and accused him of being violent.

The brouhaha started when a Twitter user named @breelea_ asked Violet when she realized she had been cheated on by her ex-boyfriend. She responded by saying, “I was asleep upstairs with our dogs and he wasn’t next to me so i checked our guest house and caught him naked in bed with a random girl.”

i was asleep upstairs with our dogs and he wasn’t next to me so i checked our guest house and caught him naked in bed with a random girl https://t.co/zpuzopWxQF

From there, all hell broke loose.

Violet—who also had an erratic relationship with Jake Paul where she said he emotionally abused her before she romantically got involved with older brother Logan Paul—and Banks broke up in July. Banks, whose real name is Ricky Banks, said on Twitter at the time that he loves “that girl to death and always will. I’ll never say a bad word about her. This shits [sic] about as hard to deal with as it gets. Please respect our privacy through this.”

He also wrote, “Just like everything else we’ve ever done, it was a team decision. Alissa is the most amazing soul I’ve ever come in contact with. She deserves love and support. She’ll continue to have mine forever.”

But on Sunday night and into early Monday morning, Violet’s tweets told a different story. After Banks responded on Sunday with a simple “I love you” tweet, she blasted him, relaying a screenshot of an apparent text message thread between the two where she accused him of being unfaithful on multiple occasions.

Wrote Violet, “Did you ‘love me’ when you texted that girl that you were on your way to her hotel room at 6 am to ‘get weird’ while i was sleeping next to you?”

did you “love me” when you texted that girl that you were on your way to her hotel room at 6 am to ‘get weird’ while i was sleeping next to you?

One Twitter user said she wanted to hear Banks’ side of the story before making her judgment. Violet responded by writing in a now-deleted tweet, “Would you like the video of me walking in on him and her??”

Violet also accused Banks of being violent, breaking eight of her phones and smashing a windshield.

did you “love me” when you broke 8 of my phones?

did you “love me” when you smashed in the back of chantel’a window of her car that she gave me?

At one point, Banks asked, “Why are we doing this online?” Considering the two combine for 11.7 million Instagram followers, 9.3 million YouTube subscribers, and 4.8 million Twitter followers, it’s fair to say that there’s plenty of interest in this social media drama. And if all of her accusations are true and she’s still pissed at him, this seems like an awfully effective way to get her online revenge.