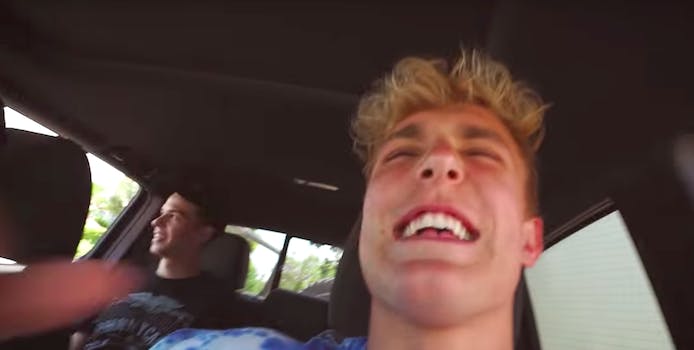 His neighbors are over it.

YouTuber Jake Paul might be known for pulling pranks on his channel, but the citizens of Los Angeles are saying “enough” after a recent stunt damaged one bystander’s hearing.

According to a lawsuit filed by a California man this week, Paul and his friends drove up blasting an “obnoxiously loud” horn just as he was exiting a West Hollywood store. The premise of the stunt was not complex: the men drove around L.A. with a super loud car horn, getting as close as they could to unsuspecting pedestrians before setting it off. Walking through a grocery store parking lot? Owned. Using a crosswalk during a red light? Gotcha.

The point of the prank was apparently to capture the looks on people’s scared faces. The segment was embedded in a larger prank video back in July (it starts around the 6:58 mark).

The man suing Paul and his company is reportedly seeking compensation both for the injury and emotional distress.

This suit is the latest in a string of negative reactions to Paul’s work this year. Back in July, the Disney Channel announced that Paul would not be returning to his role on Bizaardvark after the 20-year-old started a furniture fire that prompted his neighbors to pursue legal action. Since then, Paul has been focusing “on [his] personal brand,” but evidently his neighbors have had enough of that, too.

Paul isn’t the only YouTuber to come under fire for stretching the definition of a “prank” recently. Back in September, a couple who ran a prank-based parenting channel were charged with child neglect, lost custody of two of their children, and given five years of probation after their nearly 500 videos were called into question by the community.