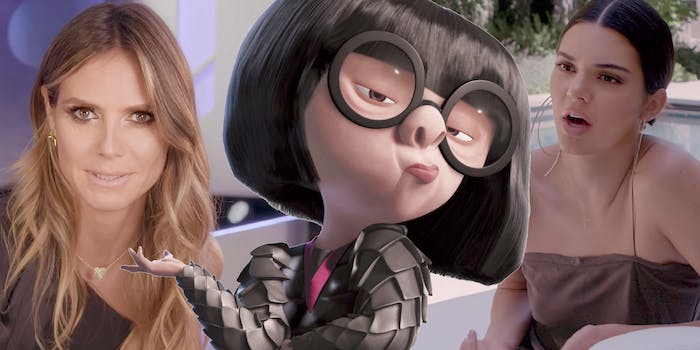 Heidi Klum, Kendall Jenner both think Edna Mode is such a true visionary

Turns out Edna's 'no capes' rule is pretty contentious in the fashion world.

Edna Mode, the fashion designer who created many a “super-suit,” and known most notably for the Incredible’s return to superhero-dom, has worked with fashion icons including Heidi Klum, Kendall Jenner, and Andre Leon Talley.

But for some reason, she still comes off as an enigma.

In a “retrospective” on the fictional fashion designer promoting 2018’s Incredibles 2, Disney Pixar picks the brains of fashion stars from the United States to Milan, asking them their favorite Mode-related stories.

Klum and Marie Claire creative director Nina Garcia recalled meeting Mode during Paris Couture week. Klum, however, knew she had finally “made it” in modeling once Mode designed her a dress for the Emmys.

“She’s a visionary, a giant,” Jenner doted. “I mean, well, not literally. She comes up to my knees.”

They love all her work, too—the nuclear onesie, the bullet-proof romper, the rocket stilletos.

However, despite Mode’s unquestionable success as a designer, there is one thing that fashion industry types have yet to come to an agreement on—Mode’s No. 1 rule of “no capes.”

“Edna hates capes, so we all hate capes,” Klum said.

“Have you ever heard anything to ludicrous?” Talley, Vogue‘s former editor-at-large, gaffed at the positioning.

Watch their full retrospective to Edna Mode below: