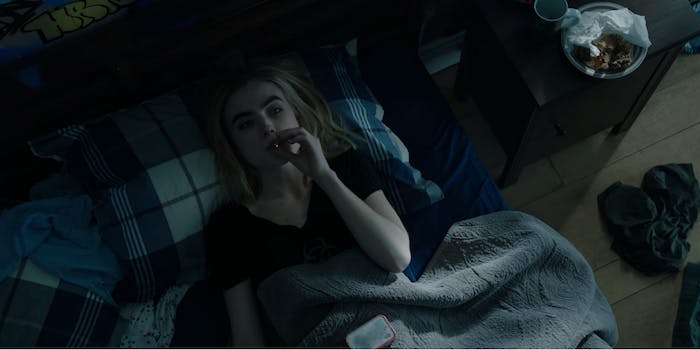 ‘Impulse’ is a smart take on the high-school superpower drama

A teen discovers she can teleport, but she's no superhero.

The original series Impulse—out Wednesday on YouTube Premium (formerly YouTube Red)—has shades of director Doug Liman’s 2008 movie Jumper, in which Hayden Christensen’s character discovers he can teleport. Steven Gould’s 2013 book Impulse (the third in the Jumper series) focuses on a teenage girl who discovers she too can “jump,” but this adaptation gives it much more resonance.

In Impulse, the teenage girl is 16-year-old Henrietta “Henry” Cole (Maddie Hasson), who has moved to the small snow-covered town of Reston, New York, with her mom, Cleo (Missi Pyle). It’s the latest in a string of moves, and Henry doesn’t hide the resentment she feels toward her mother for an unmoored adolescence. They’ve moved in with Cleo’s latest boyfriend and his daughter, Jenna (Sarah Desjardins), who is the same age as Henry. Her angst is spelled out in acts of tagging and rebellion against teachers, but when she has a seizure during class, we get a glimpse of Henry’s growing power; there seems to be a forcefield around her.

The very first scene of Impulse shows two men (one is Keegan-Michael Key) teleporting through subway cars and icy tundras; there are others with Henry’s power. But the focus of Impulse isn’t necessarily a Sense8-style roll call of global teleporters. After Henry turns down a date with Clay (Tanner Stine), the stereotypical high school jock, she enlists his help in getting her car out of his father’s lot after it’s impounded. In his truck, kissing leads to something Henry doesn’t feel comfortable with, and she voices that. In the panic of fighting Clay off, she teleports back to her room.

The assault scene was actually reshot when showrunner Lauren LeFranc came on; she spoke with survivors who said that the scene should not be a catalyst for the guy’s story and that the assault shouldn’t be an event that Henry just moves on from. Indeed, the trauma stays in the picture and informs Henry’s choices, but Impulse isn’t heavy-handed about it like 13 Reasons Why (which does make an assault and suicide a catalyst for a male character, also named Clay). A number for the Rape, Abuse & Incest National Network (RAINN) also appears at the end of each episode.

There are more markers that make her experience real: Henry reimagines the assault scene as it should have happened, with Clay asking for consent. She has a difficult time telling her mom what happened. There’s a sense of self-preservation, or maybe she doesn’t think she’ll be believed, though she tells Jenna what happened and it brings them closer together. And Jenna is trying to figure out her own sexuality.

Impulse isn’t your typical girl-has-powers series; Henry doesn’t know what’s happening to her and doesn’t necessarily feel empowered by her gift. Her first few teleports are clumsy; she leaves cars mangled and walls broken. She can also only teleport back to her home, the place she’s trying to escape. A classmate named Townes (Daniel Maslany) sees Henry’s superpowers the first time she has a seizure in class and knows there’s more to it; he tries to help her figure it out, but in a moment of frustration she advises him that she’s not his superhero sidekick.

If you’re looking for superhero action, there’s not a whole lot of it: The series takes a while to thread Henry’s story with other teleporters. There’s a subplot about the opioid crisis, perhaps to ground Impulse more in the small-town narrative, but it never really gets off the ground. And the series could definitely use a splash of humor here and there.

Impulse could be compared to Riverdale, at least in terms of small-town crime and teen malaise, but it’s more a parallel to Thelma, the 2017 film about a college student whose seizures give way to more inexplicable powers, as she discovers who she is. The teleportation is secondary here and that might disappoint some people. The focus is Henry’s journey, however complicated and messy. Impulse takes care to make it feel real.