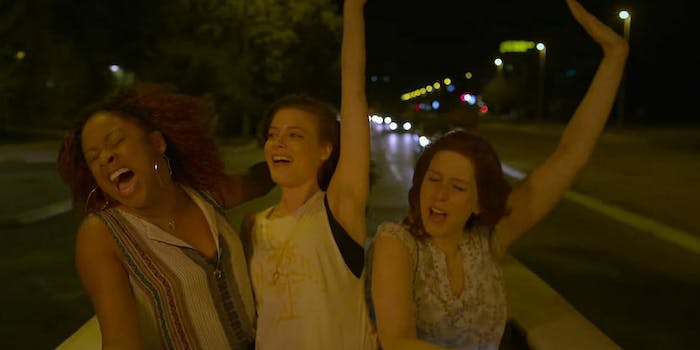 Netflix’s ‘Ibiza’ is duller than a staycation

You'll be ready to cut this trip short.

I love going into a movie with as little information as possible. It makes the start of every movie exciting. The streaming model makes it exceptionally easy to avoid trailers. Just fire up Netflix, click play, and you’re off. The sense of discovery is such a fun part of movie watching that I don’t want trailers to rob me of that experience.

So when I started Netflix’s latest original film, Ibiza, and saw Gillian Jacobs, Phoebe Robinson, Vanessa Bayer, and Michaela Watkins, I thought I hit the jackpot. All four are great, and I think Bayer is one of the funniest and most underutilized actresses in the game. Hopes were high. But 10 minutes into Ibiza, my excitement curdled and dread set in. By the end, the only thought was how could this suck so much?

Ibiza is unrelentingly lame. That is the only way to put it. The film’s iMDB page sums up the plot in one line: “A young American woman and her two best friends seek out a hot DJ in Spain.”

Jacobs plays Harper, the young American, with Robinson and Bayer as the friends, Leah and Nikki. Harper works for a PR firm and is sent overseas by her caricature of a bad boss, Sarah (Watkins). On their first night out, the women hit a party, Harper sees the DJ on a screen, and immediately falls in love. But Harper only has a couple days, plus a cumbersome work meeting, standing between her and true love. Or at the very least, a hot hookup. But Ibiza is almost totally free of conflict, so you know how the movie will end before it even starts.

Ibiza wants to be a fun hangout movie and, for what it’s worth, the cast looks like they’re having a blast. But that sense of fun doesn’t translate. Ibiza is such a drag that it makes Ibiza look dull. By the fifth or sixth time director Alex Richanbach opts for a contemplative shot of people dancing while music blares, you’ll be ready cut the trip short. Everything about Ibiza just feels so phony. Everything is disjointed to the point where the story feels like a first draft. The characters are generic and instantly forgettable. Most of the jokes have flat setups and flatter punchlines. There are no stakes to hang any kind of dramatic weight on. We are stuck watching characters we don’t care about as they spend a weekend doing things they barely care about.

It all starts with Harper. She’s a middle-of-the-road worker bee who needs to jumpstart her life. She has no romantic prospects and, you’ll never believe it, her boss and friends think she needs just to get laid. Jacobs does what she can to make Harper into a sympathetic character, but there is only so much you can do with a character this shapeless. Whether Harper lands the client or loses her job, there is never a sense that her life will change one way or the other. Likewise, her success or failure with DJ Leo (Richard Madden, Robb Stark on Game of Thrones) means nothing. The film pitches their romance as a whirlwind kind of thing, but it doesn’t register beyond a slight breeze.

Most of the film’s successes are due to the strength of the cast. Robinson (one half of 2 Dope Queens) and Bayer bring a spark to Leah and Nikki that is absent from the rest of the film. The scenes where the main trio is hanging out are at least fun. The chemistry between the women is just right, but the movie keeps splitting the group up, to its detriment. There are a few comic set pieces that briefly bring some personality to the film, but their success is wholly dependent on the reactions of Robinson and Bayer.

The script, by Lauryn Kahn, doesn’t have anything interesting to offer thematically, comically, emotionally, or otherwise. There is a point where a character, in a moment of faux-profundity, says, “Harper, you have to work as hard to find yourself as you worked to find him.” It’s such a hacky line, but it perfectly sums up the movie. Ibiza is the kind of film that expects you to be all in on its characters and story without actually giving you a reason to invest.

Ibiza is one of the more forgettable Netflix releases to come out. It’s a bad movie, but not bad in an entertaining way like The Cloverfield Paradox or The Polka King. It’s bad in the way that makes you resent having spent your time on it. I know what you’re thinking and yeah, I probably could’ve avoided this mess if I had watched the trailer first—or even heeded the warning of the movie’s poster. Harper is wearing a unicorn outfit as Nikki and Leah flank her. My word.

Still, I remain committed to avoiding trailers. Ibiza may have been a bad trip, but that won’t stop me from going on the next one.