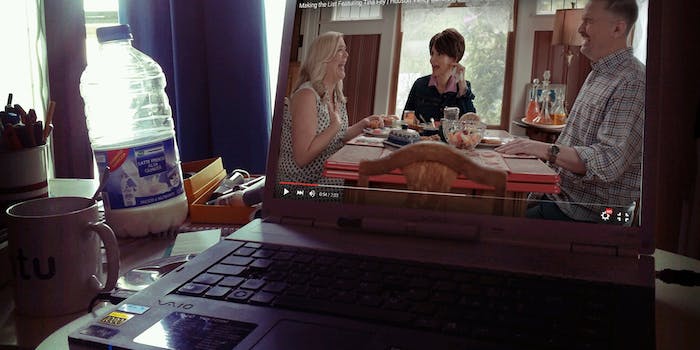 On the set of super-gay webseries ‘Hudson Valley Ballers’

It's woodsy, it's gay. Welcome to the set of the funniest, weirdest queer webseries online.

It’s just like any other gay bar: sweaty dancers crammed into a writhing circle, generic dance music thumping, a too-cool DJ holding court above the crowd.

Except none of it is real.

A crowd of about 20 people is jammed into the center of the Metropolitan, a queer hotspot and dive bar in Williamsburg. But most are extras, surrounding comedians and longtime Saturday Night Live writers Paula Pell and James Anderson, who are shooting a scene for their webseries Hudson Valley Ballers. As SNL’s in-house gay writers, Pell and Anderson have been close friends for over 30 years; it was only natural for the pair decided to branch off and do a sketch comedy of their own. Hudson Valley Ballers premiered in 2013 for Above Average the digital arm of Lorne Michaels’ Broadway Video, and is now in its second season. The second half of the latest season premiered earlier this week.

The extras surround Pell and Anderson, arms waving in the air, hands held together in a sort of Maypole dance as the film crew huddles off to one side barking instructions into the crowd.

“Everyone in a circle!” shouts series director Silas Howard (Transparent, By Hook or By Crook). He stumbles over some sandbags and laughs to himself with an air of exhaustion, saying quietly, “We’re making this up as we go along.”

Everyone in the cast and crew is exhausted. They’ve spent the past week frantically filming around the clock at the country set in upstate New York, and this is the last day of shooting. Pell’s hoarse voice crumbles in response to a question. She’s sick with a cold, and the shoot is speeding up in order to get her home and into bed to rest. When the gay bar episode premiered on Aug. 12, most of Pell’s lines had been dubbed by voiceover to hide the fact that she was barely able to squeak out an audible note.

Weeks later, after Pell has recovered and season 2 of Hudson Valley Ballers has posted online, I talk with Pell about shooting a party scene while seemingly on her deathbed.

“I hated that I was sick because it was such a joyful romp at every turn,” Pell said later. “I went back to the hotel that night and stopped at Katz’s Deli to get some soup, and a young handsome man who worked there asked me if I had a husband. I lied and said yes and he gave me his phone number anyway, ‘just in case.’ It made me laugh so hard. Young handsome men never flirt with me. I get heat from old dudes that run the parking garages.”

Pell is relentlessly funny, but in a self-consciously weirdo way. She and Anderson have a total of 33 years between them of writing for SNL, and both now have homes in the Hudson Valley. The two met in college, at the University of Tennessee, and quickly became one of comedy’s strongest platonic marriages.

Like many queer marriages, Pell and Anderson’s comedy partnership has opened up to include new partners—notably, L.A.–based lesbian writer and cinematographer Michelle Lawler. Pell and Lawler recently parlayed two seasons of Hudson Valley Ballers into a new series deal with HBO, a half-hour comedy about an Olympic figure skater who falls from grace.

“There is something deeply special about the gathering of these people,” said Pell of Hudson Valley Ballers’ polymorphic queer family. “James and I playing out our ridiculous and loving friendship that makes me so happy. It refreshes my soul, truly. I hope we do it until James and I are just staring off on shower chairs. I have worked with many, many talented and dedicated people. James is the funniest person on the planet, and Michelle and Silas are just an incredible creative pair. They are both so good at what they do and bring so much tireless passion to it from beginning to end. They are my super handsome heroes.” 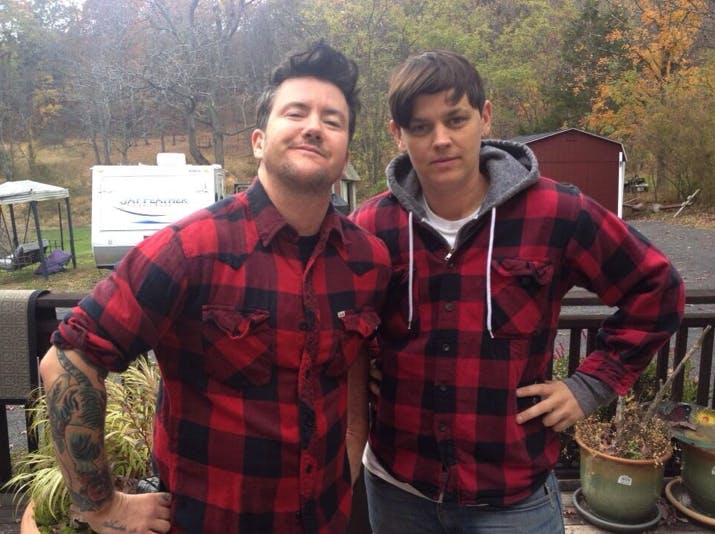 Howard, who is a “super proud queer and trans” man, toured for years as the drummer for ’90s dyke-punk band Tribe 8 before moving on to Hollywood. He told the Daily Dot that working on a queer comedy show with friends was a total no-brainer—just like becoming the first transgender person to direct an episode of Transparent.

“My work really centers in queerness, and humor as a way to prevail is a big factor,” Howard said. “All my past DIY work is somehow connected to my current work for hire, but with both Transparent and Hudson Valley Ballers, it’s all about friends and family making art together.”

At 52, Pell is just entering her breakout period, developing a strong lineup of her own projects after years in the writers’ room for shows like 30 Rock. Her first screenplay, Sisters, was made into a film released this year starring Tina Fey and Amy Poehler. But Pell’s comedy work with Anderson stays close to home: On Hudson Valley Ballers, many of the jokes center on the pair’s self-deprecating sense of being aging gays surrounded by hot young studs and hip celebs who make them feel uncool and obsolete.

Pell’s character decorates an entire room with tributes to the many pets she’s taken in over the years, a send-up of older lesbian loneliness and the trope of the crazy cat lady. In an episode that features Tina Fey as “Gingie,” a cruel Midwestern ruler of a corporate empire suspiciously similar to Angie’s List, Fey accidentally powders her décolletage with the ashes of a cremated cat.

Part of the charm of Hudson Valley Ballers is the way the show’s setup allows for a constant stream of guest stars (it is a bed and breakfast, after all). In season 1, Paul Rudd and Kate McKinnon dropped in to play the hired help that Anderson and Pell take on as younger lovers. The current season is bursting with comedy celeb appearances: SNL alums Ana Gasteyer, Cecily Strong, and Rachel Dratch all take on roles, and Orange Is the New Black star Natasha Lyonne drops by too.

One of the season’s more memorable roles is fleshed out by Lena Dunham as “Humane Jane,” an odd, country-butch exterminator who professes to love animals but may be nothing more than a fraud in a freaky coonskin cap.

Pell said her personal highlight was the episode in which Gasteyer plays a holier-than-thou liberal neighbor who is horrified after Pell and Anderson poop in her yard.

“One of my favorite days was when James and I go to the neighbor’s chili party and we think that we are going to be the stars, but they are all socially conscious intellectuals and we are stone-cold dumbasses,” Pell recalls. “We lay in bed at the end of the night and eat a giant wang of bread and realize that we may be dumb.”

Dumb, they are not. “Awkwardly hilarious” is more fitting. And as opportunities continue to expand, it seems pretty likely that another season of Hudson Valley Ballers is in the future. The current slate of episodes were sponsored by Lexus’ L Studio, which Pell said allowed the show to expand into more locations, hire more guest stars, and use “fancier cameras.”

Of course, the stars were treated like prima donnas too.

“James and I were provided with all the Spanx we requested,” said Pell.

Clarification 4:02pm CT: The latest version of this article has further clarified the relationship between Lorne Michaels and Above Average.

Photo via orsorama/Flickr (CC BY 2.0) | Remix by Fernando Alfonso III