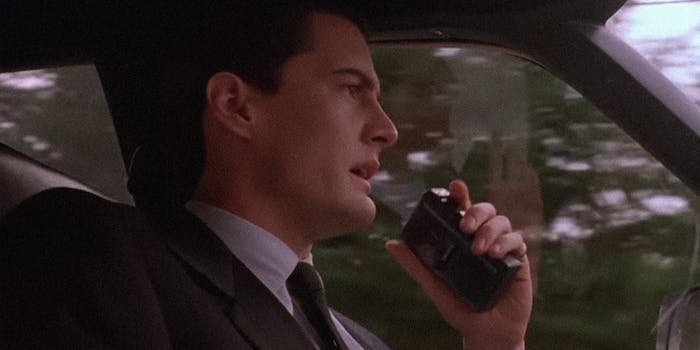 How to watch ‘Twin Peaks’—without cable

No more excuses, it's time to binge on 'Twin Peaks.'

After a 25-year hiatus, Twin Peaks returned more bold and creative than ever in May. The acclaimed series from auteur David Lynch, which originally aired on ABC, premiered its 18-hour reboot to instant acclaim. But if you’re like most of us, you’ve never seen it.

There’s social pressure to watch, too. Though it only aired for two seasons, plus a movie, this is the series that changed television. The good news is that it’s never been easier to go on a weekend bender and catch up.

How to watch Twin Peaks on Netflix

Are you a Netflix subscriber? Say no more fam: The series is available via the streaming giant.

How to watch Twin Peaks on Hulu

Oh, so you’re one of those Hulu people, huh? You’re in luck. You can watch the first two seasons, but the new episodes are only available to Showtime subscribers. If you’re mostly curious about the original, you can sign-up for a free 30-day trial on Hulu and see what you’ve been missing all these years.

How to watch Twin Peaks on Amazon

Each season will run you eight bucks on Amazon, but Prime subscribers get it for free. But if you want to catch up on the series, and then pivot toward Twin Peaks 2017, you can add Showtime to your Amazon Prime package for only $8.99 a month, and there’s a free seven-day trial to get you started. The first four parts of the Twin Peaks season 3 are currently available on Amazon via Showtime.

How to watch Twin Peaks on Showtime

Given that you can watch the series first and via the Showtime app on most streaming platforms (officially: Amazon, Android, Apple TV, Hulu, PlayStation Vue, Roku, Sling, YouTube TV, satellite, cable), you may just want to pop for the Showtime app. It comes with a 30-day free trial and will run you $10.00 per month. Hey, that’s one night’s worth of downtown parking! But if you have Amazon Prime already, you can save a buck by adding the Showtime package.

If you watch the original two seasons, available via the app, and hate it, you can walk away without paying a dime.

There you have it. You’re officially out of excuses for not being able to watch Twin Peaks online.