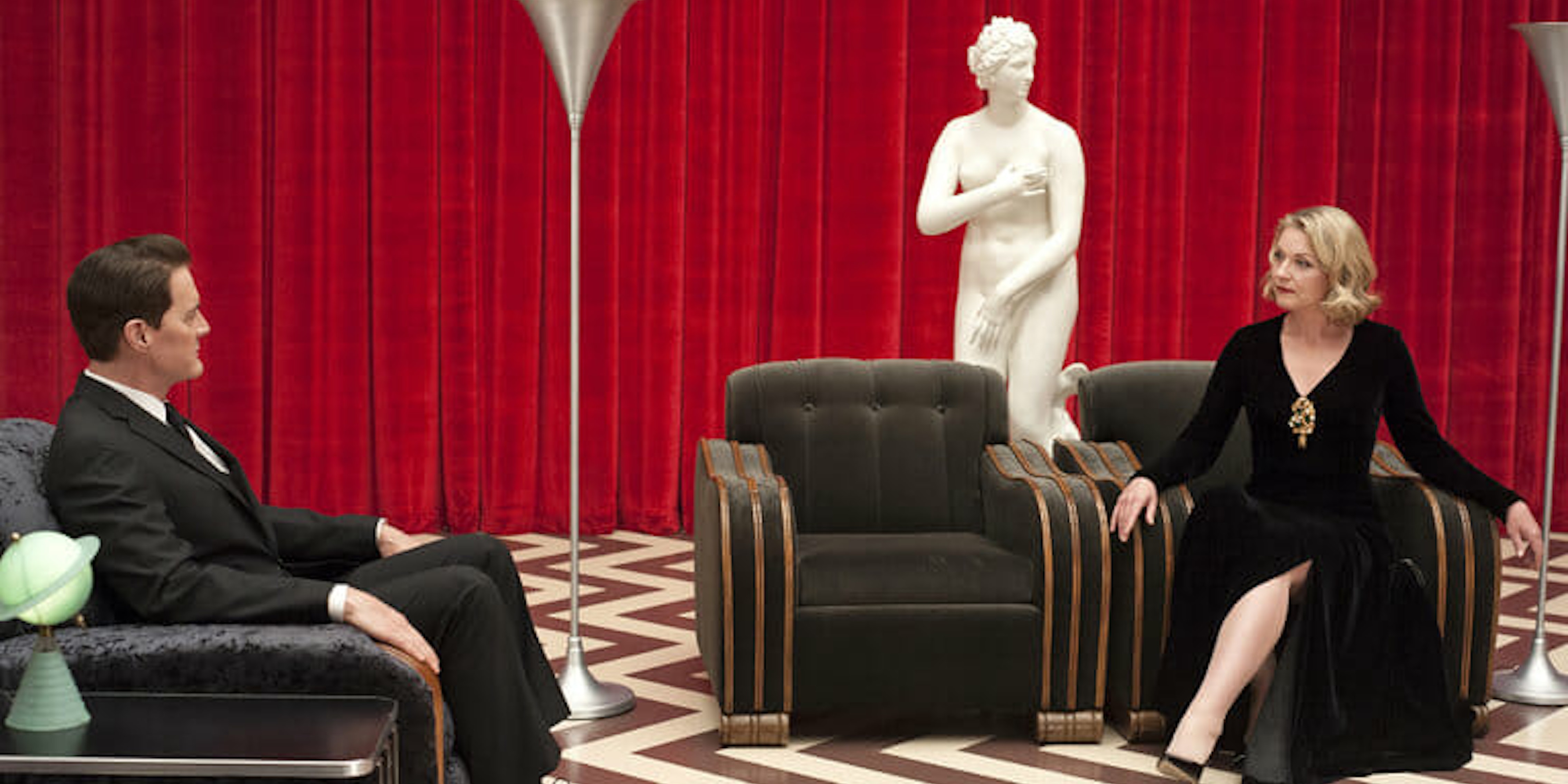 The return of ‘Twin Peaks’—and the limits of recap culture

Reviewing David Lynch's reboot is an exercise in futility.

Twin Peaks returned to television precisely as the show left it: challenging, confounding, and uniquely divisive. Showtime’s revival of the cult phenomenon, which lasted for two seasons on ABC, earned extremely mixed reactions from critics. Reviewers were alternately beguiled and baffled by the two episodes which premiered Sunday night. While the Onion A.V. Club called it “uncompromising surrealism and horror,” Michael Ausiello, the critic for TVLine, claimed that as a fan of the show, it’s “hard not to feel like I’ve been completely, utterly duped.”

Your opinion of Twin Peaks’ third season may depend on how you remember the show: Was it an addictive murder mystery in the vein of Mark Frost’s own Hill Street Blues—with that Lynchian quirk thrown in? Or was Twin Peaks a singular auteurist vision, one that broke with many of the conventions of genre television? If you were in the former camp, you were likely to be disappointed by the premiere of the aptly named The Return, which is closer in style to Lynch’s Inland Empire and early arthouse efforts like Eraserhead than the small-town noir fans loved and lost so long ago.

To review something like Twin Peaks, though, is both an unenviable task and an exercise in futility. Like the Lynchian dreamscapes Mulholland Dr. and Lost Highway, The Return resists easy classification—or really any classification. How does one make sense, for instance, of a magic blue box that contains an elderly couple inside or the existence of an omnipresent man with no eyebrows, a mystery figure whose eerie presence feels like an indictment? The Return opens with yet another box. A team of watchers have been hired on a stakeout mission to see if anything appears inside. The blank cube may represent the experience of watching television, implicating the viewer in the narrative, or as so often is the case in Lynch’s work, it may mean nothing at all.

In reviewing Mulholland Dr., the late critic Roger Ebert described its famously opaque narrative as “the dreamer rising slowly to consciousness, as threads from the dream fight for space with recent memories from real life, and with fragments of other dreams—old ones and those still in development.” It’s not a film that defies logic as much as it operates under its own set of rules, ones that have more to do with the depths of our subconscious mind than traditional linear storytelling modes.

There’s the faintest hint of a plot. The Return opens 25 years after the murder of Laura Palmer (Sheryl Lee), and Agent Dale Cooper (Kyle Maclachlan) is still trapped in the Black Lodge. But then there’s also the murder of a librarian in South Dakota, among many other things. Viewers also encounter a casino where everyone’s a lucky winner, a hapless doppelganger who frequents the world’s most understanding prostitute, and an automobile cigarette lighter that may be the portal to another dimension. Every time the narrative threatens to progress too much, the story reveals another hidden room tucked away inside it—like the endless warehouse theater in Charlie Kaufman’s Synecdoche, New York. The experience is alienating and proudly so, like Brecht for the Peak TV era.

Between the two episodes that aired on television and the two available on Hulu (for Showtime subscribers only), Lynch’s Americana nightmare begins to come into focus. As much as liking The Return is possible, I enjoyed what I’ve seen so far, but the dream is still unfolding. The director—best known for the neo-noir masterpiece Blue Velvet—has 14 more episodes in store. The Twin Peaks revival could meander toward its eventual plot, but well, maybe not. It’s hard to say what’s a MacGuffin when everything is some sort of illusion.

If the 30 episodes that aired on ABC between 1990 and 1991 redefined television in an era before Tony Soprano and Walter White, the new Twin Peaks forces us to rethink how we consume it. Audiences today live in a media landscape of instant reaction. While tuning into Scandal or How to Get Away with Murder, viewers have the ability to tweet their immediate thoughts to others following along in real time. Internet recap culture likewise functions as its own second screen, and there’s a drawback to that: Reviewing individual episodes as discrete entities is difficult without assessing a narrative in its totality. There are great, insightful recaps on the web, but imagine picking apart each note produced by an orchestra without hearing the full symphony.

The limits of such reviews were illustrated by HBO’s True Detective, a crime anthology where the mysteries simply didn’t merit the slavish devotion to solving them. The show’s passionate fans poured over every aspect of its apparent symbolism—from the obscure literary references behind the Yellow King to a supposed clue hidden within a child’s drawing. True Detective’s first season concluded, though, not with an explanation that tied together the loose ends of its mythology but a left-field curve that erased the whiteboards of the internet’s armchair sleuths. The killer wasn’t Rust Cohle (Matthew McConaughey), a stoic nihilist whose worldview is defined by pain and suffering; or his gregarious partner, Martin Hart (Woody Harrelson). The antagonist was a background character, not a criminal mastermind but a man riding a lawnmower.

True Detective seemed to add up to less than the sum of its parts, but maybe the circle was always flat. And maybe that’s OK. There’s nothing wrong with an exercise in genre for its own sake, even despite the attention-grabbing overtures to the trappings of prestige television (e.g., the nods to H.P. Lovecraft and Friedrich Nietzsche).

Numerous shows have revealed themselves to be less, more, or just different than what their audience perceived them to be. Crazy Ex-Girlfriend took a sexist premise and turned it into a thoughtful meditation on mental illness, one that reveals new insights into human frailty with each repeat viewing. It’s a show where characters don’t grow on you—they grow with you. Homeland came into its second season as one of the hottest shows on TV before becoming the program it is now: a great concept trapped within a maddening exercise in wheel-spinning. If one were to review the first few episodes of Homeland’s sophomore outing, you might deem it a master class in narrative tension. But after watching Carrie (Claire Danes) chase down a terrorist with a pipe, you’d call it a hot mess.

Given Twin Peaks’ history, it’s difficult to say if Lynch is building to a grand payoff, a crescendo that will bring his disparate ideas into harmony. We’ve been down this road once before. Although criticism of the show’s final season on broadcast TV focused on the too-early reveal of Laura Palmer’s killer, that was only part of the problem. Twin Peaks was about capturing a twisted Rockwellian mood, but the show was always too in love with its own vibe. Brando wannabe James Hurley’s affair with a married femme fatale (think The Postman Rings Twice but if both characters were lobotomized) gets a two-episode arc and is never spoken of again. Meanwhile, the Dick-Andy-Lucy love triangle goes nowhere for the hell of it.

The Return would seem to offer Lynch a chance to rectify the most divisive and off-putting aspects of his oeuvre, but the early episodes don’t appear ready to make amends. If anything, the director’s vision has only become more confident in its insularity. It won’t be the reboot fans expected, and it doesn’t seem made for critics—or anyone else—to enjoy. The third season, which features a talking tree that claims to be the evolution of the human arm, is sure to inspire debate and outrage. But like a mystery box waiting to reveal its secrets, Twin Peaks also requires our patience.