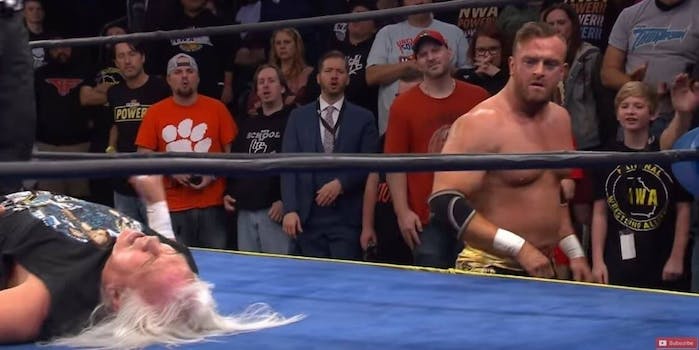 How to live stream the NWA Hard Times PPV

You can't beat a title tournament.

The National Wrestling Alliance has a relatively new studio TV show, a new influx of talent, and a new attitude. Now, it all needs is a new World Television Champion. That’s the main point of Friday night’s NWA Hard Times PPV.

With wrestlers such as The Question Mark, Zicky Dice, and rising newcomer Ricky Starks entered into an eight-man tournament, the last wrestler standing will be crowned the new World Television titleholder.

The NWA has begun making an impact in the past few months thanks to its studio show, seen weekly on Tuesdays as it’s broadcast from Atlanta on the promotion’s YouTube channel. The TV title should also be a fun throwback to the NWA of the 1980s, before it became WCW and where Hall of Famers like Tully Blanchard and Arn Anderson held the belt.

In this case, though, The Question Mark, Dice, and Starks—who lost his Pure Prestige title in the independent Inspire Pro Wrestling promotion last Sunday in a match that featured an impressive double butt-to-butt spot vs. Effy—will have to run through a gauntlet of opponents to get their hands on the championship.

My night got absolutely made by the @InspireProWres PURE PRESTIGE CHAMPIONSHIP match! Just look at this artiststy in motion! @EFFYlives and @starkmanjones pulled out all the stops, and cheeks! pic.twitter.com/bw60j6eM8J

Though he’s not in the tournament, NWA heavyweight champion Nick Aldis also has a big match on the Hard Times card. He’ll face Flip Gordon, a standout for the Ring of Honor promotion, in an inter-promotional match. Aldis recently attacked Marty Scurll at an ROH taping in Atlanta—the NWA’s hometown—and he had a recent encounter with Villain Enterprises’ Brody King and Gordon.

It should be an intriguing card with plenty of mystery still to come. After all, we don’t know some of the tournament matchups that will take place.

Here’s everything you need to know to watch the NWA Hard Times live stream.

The best way to watch these NWA wrestlers compete on Hard Times is through Fite TV.

Since it’s a PPV, there’s no legal way to get around the $19.99 fee to watch the card. But Fite TV (sign up here) has got you covered. Fite TV is available on services like Roku, Apple TV, Amazon Fire Stick, PlayStation 4, Xbox One, Android and iOS devices, desktop and laptop computers, and smart TVs.