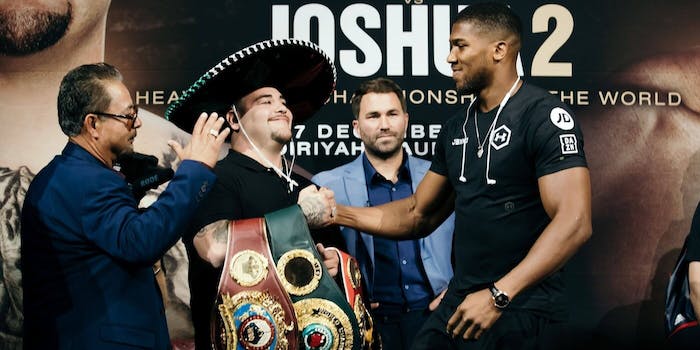 How to stream Andy Ruiz vs. Anthony Joshua 2

It's for the heavyweight championship of the world.

The most stunning heavyweight upset of the last quarter-century occurred last June when Andy Ruiz knocked out Anthony Joshua to take his belts and proclaim himself as the champion of the world. It was shocking. Joshua was an undefeated star, and Ruiz was, well, pudgy. On Saturday, Joshua will face Ruiz in a rematch you can live stream on DAZN—and he wants his redemption (and his belts back).

“As long as I have breath in me, I’ll keep on fighting for the passion of boxing, more so to carry the sport, as an ambassador of the sport, and for an ambassador of championship-level fighting,” Joshua said during a recent press conference. “I feel like that’s where I belong.

“I was born with a fighting spirit. I know how to fight. And the blessing is that people reflect it as you lost the titles, you lost your titles. And I always say that to lose something is to never get it back. But I believe, and I’m certain, that I am going to have a second chance on Dec. 7.”

But the way Ruiz performed in their first fight makes some observers wary that Joshua can actually beat the new champion. Even though Joshua is the betting favorite, one has to wonder if his faulty conditioning and his mentality for the rematch that means so much to his career will allow him to triumph in his second chance.

Here’s everything you need to know to watch Ruiz vs. Joshua without cable.

How to stream Andy Ruiz vs. Anthony Joshua without cable

The only legal way to watch Ruiz vs. Joshua 2 in the U.S. is on DAZN. Since September 2018, the streaming service has shown some of the most important boxing matches in the sport. DAZN showcased Canelo Alvarez knocking out Sergey Kovalev, and it featured Ruiz upsetting Joshua in June. Gennadiy Golovkin has fought twice on the service since June, and the exciting World Boxing Super Series tournament has been a mainstay. And don’t forget about KSI’s upset victory against Logan Paul in a YouTube boxing extravaganza last month.

DAZN costs $19.99 per month or $99.99 for the entire year, but for fight fans, it’s been a tremendous value. It streams more than 100 fight cards per year—including a large number of MMA cards with Bellator—and you can watch some of the best boxers in the world (like Alvarez, Joshua, and Golovkin) and some of the potential rising stars (like Devin Haney and Vergil Ortiz Jr). DAZN says it’s doing its best to try to kill the longtime boxing PPV model, but another perk of a subscription is getting to watch fighters like Ruiz and Joshua on a regular basis that should get your blood pounding as the fists begin flying.

Ruiz vs. Joshua: Why it matters

To say Ruiz’s pummeling of Joshua six months ago was surprising is an understatement. Joshua had beaten a number of top-10 heavyweights, including longtime heavyweight champ Wladimir Klitschko in 2017, and the only time Ruiz had faced an elite fighter was when he lost to former titlist Joseph Parker in 2016.

After Joshua knocked Ruiz down in the third round, it was another clue that Joshua would eventually secure the victory. But then Ruiz (33-1, 22 knockouts) landed a left hook to the ear, discombobulating Joshua (22-1, 21 KOs) and sending him to the canvas. And from there, Ruiz dominated, knocking him down three more times before the referee halted the bout in the seventh round.

Ruiz was about a 10/1 underdog the first time. But he was clearly the better fighter that night.

The big question is whether Joshua—who’s still a 2/1 favorite heading into the rematch—can show he’s the superior boxer on Saturday.

“I know AJ. I know he wants his belts back. I know he does. I know how it feels to lose,” Ruiz said. “I lost against Joseph Parker when I thought I won the fight. And he could bounce back. But my job is for him not to win. For him not to get these belts back.”

Despite his weight, Ruiz has fast hands and a powerful punch. Though Joshua has a significant reach advantage, Ruiz was a good enough boxer in the first fight to close the distance without getting tagged by Joshua’s shots and land his own sharp blows. It remains to be seen if Joshua can adjust to that in the rematch.

There’s also the question of Joshua’s mental state. He was hurt throughout the first fight and couldn’t recuperate effectively. Whether that’s because of a lack of conditioning or because he couldn’t overcome a mental block, that is a big storyline heading into the second bout.

“Your mind is the biggest muscle in the body. I just use that to my advantage,” Joshua said. “Positive self-talk is important. You have to really believe it in your heart, not just your mind.”

Saturday will tell us an awful lot about what inside Joshua’s heart and mind.