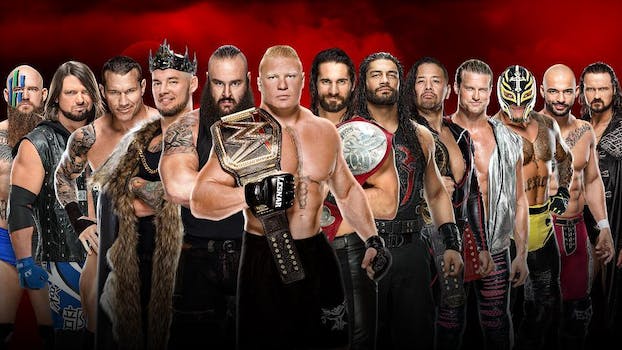 How to watch WWE Royal Rumble

Let's get ready to rumble!

Ah, Royal Rumble: the genius idea of taking all the wrestling talent you can cram into the squared circle and facing them all against one another. It’s kind of like a mini-Hunger Games, and it never gets old to us. If you agree, you should probably tune in this Sunday night to see the 2020 edition of this perennial classic.

If you haven’t tuned in to WWE in a while, here’s the TL;DR: There are some mighty fights on the docket besides the men and women’s Royal Rumble matches, including an ongoing rivalry between fan fave “The Fiend” Bray Wyatt and Daniel Bryan, a juicy-looking Raw Women’s match between Champion Becky Lynch and the always-plucky Asuka, and a Falls Count Anywhere Match between Roman Reigns and King Corbin. We’ll also get to watch SmackDown Women’s Champion and freshly-turned heel Bayley take on Lacey Evans, Shorty G. duking it out with Sheamus, and United States Champion Andrade going head to head with Humberto Carrillo.

It should be an action-packed night, and a good excuse to settle on the sofa with a few beers.

WWE Network is the best way to get the Royal Rumble live stream if you want to watch these wrestlers go nuts in the ring. If you’re not already a convert, the news is good: You can get a month of the service for free right now, which means you can watch Royal Rumble without paying a nickel. After that, the service costs just $9.99 per month, but you can cancel anytime. Considering WWE Network lets you stream all 14 yearly pay-per-view events at no additional cost, that’s an incredible deal. Seriously, just think about how many times you’ve paid $60 to watch one PPV. For that same amount, you’ll get a whole year of WWE Network—and access to all past events. Between NXT, RAW, and Smackdown Live you’ll be able to watch all your faves hit the mat on a weekly basis, and you’ll also get access to documentaries, reality programming like My Son/Daughter Is a WWE Superstar, and originals like Wrestlemania Rewind.

Other ways to watch Royal Rumble

If you have cable, you can order Royal Rumble from Spectrum, Cox, Xfinity, Verizon FiOS TV, Cable One, Dish Network, and DirecTV for $59.99-$69.99. But given all of the benefits that come with WWE Network—not to mention the chance to get started with one free month—we’d highly recommend figuring out a way to stream Royal Rumble using one of the devices listed above.