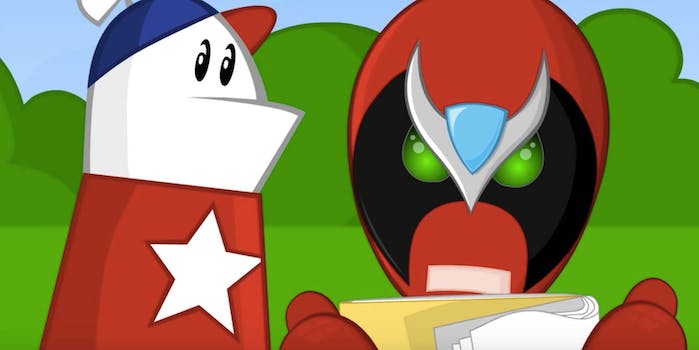 Could this be the start of something bigger?

To celebrate his 20th anniversary (Editor’s note: JFC, we’re old), Homestar Runner is back with a brand new cartoon: “Homestar Runner Goes for the Gold.”

Children of the late ’90s and early aughts will no doubt have fond memories of the hapless hero whose Flash animations distracted us from countless hours of algebra homework. In the latest episode, Strong Bad (he of email fame) and Homestar dig through an old box in the shed and find a long-lost story by Mike and Craig, a.k.a. co-creators Mike Chapman and Craig Zobel.

The seven-and-a-half-minute clip tells the tale of the Brothers Strong (Strong Bad, Strong Sad, and Strong Mad) competing against Homestar and his “All-Stars” (including a much-loved Pom Pom) in the annual triathlon. It features a charming moral about inclusion and a redemption story for elephant-bottomed Strongsad.

But it’s those last few scenes that will catch fans’ ears: Homestar Runner mentions the beginning of “a great new era” and promises his whistling bwee-bwoops will continue for another 20 years. Then, Strong Bad shows off his Mario Paint animation, and the two say they’ll revert to Flash (ironically dubbed “way less obsolete!”) for a new cartoon.

It’s not the first Homestar clip we’ve been gifted over the past few years. After a popular April Fools’ Day joke in 2014, we got a summer update and a Halloween special, but it’s been relatively quiet since then. Will the next decade or two pick up the pace like Strong Sad in the final stretch? Stay tuned to find out.