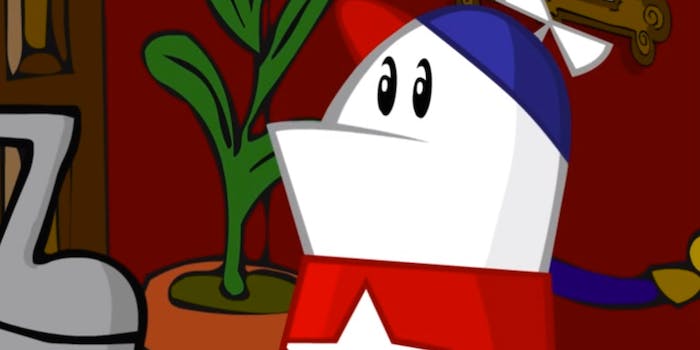 No April Fool’s Day gag this time, ‘Homestar Runner’ is coming back.

When fans saw the first update in three years to beloved Internet cartoon Homestar Runner on April Fool’s Day this year, they were ecstatic. Now it looks like all that love and positive response inspired the creators to bring back the cartoon on a more regular basis.

During an interview by Jeff Rubin on his podcast The Jeff Rubin Jeff Rubin Show, co-creator Matt Chapman said the April update was done to “see if anyone gives a crap anymore.” After the enthusiastic reaction from fans, he and his brother, co-creator Mike Chapman, are now hoping to make more frequent episodes. They won’t be updating as much as they used to, and going full time is not the main goal at this point according to Chapman, but updates more often than every three or four years will no doubt be enough for fans.

“I would just love to be making cartoons with those characters again, that’s sort of the first thing that I’m thinking,” he said.

The two brothers have already been discussing a potential Strong Bad email—a favorite feature of the previous run—but Chapman didn’t reveal further details, not wanting to set expectations too high. Even without more information on the cartoon’s return, fans have come out in force on Twitter to share their excitement.

Homestar Runner is coming back! I can’t decide if I’m more excited about Strong Bad potentially on twitter or Strong Sad on Tumblr!

Considering how much the Internet has changed since Homestar Runner’s heyday, the possibilities seem endless for what the Chapmans and their classic characters can cover. Chapman said fans should keep an eye on the site over the summer and fall for updates.

You can listen to the entire interview below.