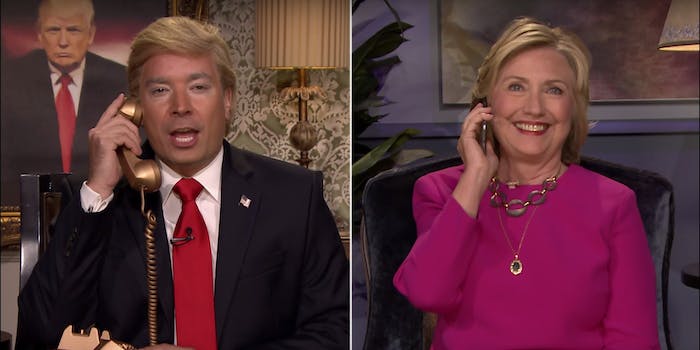 'I'm having a good time watching it,' Clinton said of Trump's campaign.

The candidates at the second Republican debate took many swings at Hillary Clinton on Wednesday night, but the Democratic candidate was more than prepared to throw some political punches of her own.

While Clinton’s appearance on The Tonight Show on Wednesday was filmed prior to the debate, it was pretty easy to guess what might be said. So Jimmy Fallon, dressed as Donald Trump, called Clinton prior to her appearance onstage to conduct a mock interview. Remember, Trump had already interviewed the best person out there: himself.

During the real interview, Clinton talked about her plans to raise people’s’ incomes, reduce the national debt, and handle rising college tuition costs. She also discussed her use of teleprompters, her classified emails, and taking that selfie with Kim Kardashian.

Fallon threw some rapid-fire questions her way, but she mostly talked about Trump and admitted what many Americans were thinking: she’s entertained by his campaign.

“I think that he’s going to go as long as he wants to go and more power to him,” she said. “He’s making the most out of it and I’m having a good time watching it.”

And her Trump impression ain’t half bad.

At least she now has the perfect GIF lined up for the rest of the GOP debates.