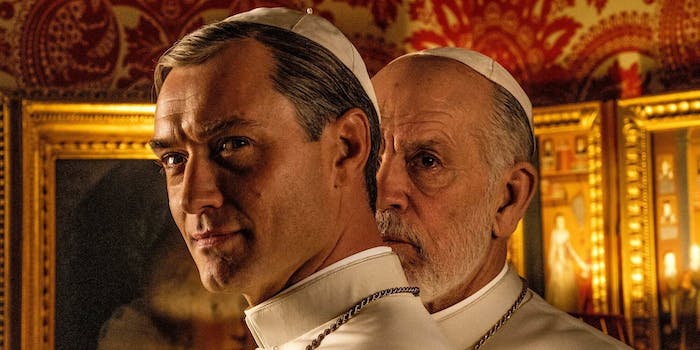 The sequel to 'The Young Pope' is here, and it's as luxuriously weird as ever.

2020 is coming in hot with this delightfully unexpected pleasure: John Malkovich wearing smoky eyeliner and lounging around like a lizard sunning itself on a rock, playing the harp and namedropping Meghan Markle while deciding whether to become the next Pope. “The man seems to be made of velvet,” another character remarks.

Created by Oscar-winning filmmaker Paolo Sorrentino, The Young Pope was an enthusiastically weird work of Italian art cinema, marketed to U.S. audiences as a schlocky HBO dramedy. The title and star (Jude Law as the handsome and manipulative Pope Pius XIII; only “young” by pope standards) lent themselves to memes about The Pope That Fucks. Superficially, it looked like the Riverdale of religious dramas. But while The Young Pope was often melodramatic and absurd, it wasn’t what you’d expect from HBO’s punchy trailers.

Pius XIII, aka Lenny Belardo, was a staunchly celibate conservative. He wielded his power like a mob boss while proclaiming his dedication to Christian tradition. Terrifying yet ridiculous, he ruled over ethical debates and petty political infighting within the Vatican, hiding a childlike craving to be directly recognized by God. The Young Pope featured stylish montages set to songs like LMFAO’s “Sexy and I Know It,” but it was also deeply interested in theology and the cultural power of the Catholic Church. Sex scenes were relatively rare. Its sequel, The New Pope, paints a more sordid portrait of the Vatican, shaped by Jude Law’s replacement Cardinal John Brannox (Malkovich), a melancholy English socialite whose motives are more opaque than the two-faced Lenny Belardo.

It’s not really a spoiler to confirm that Brannox becomes the titular New Pope, although he doesn’t get there immediately. He rises to power in unusual circumstances, because Pius isn’t actually dead. He’s in a coma, and like any TV coma storyline, Pius XIII’s slumbering body is a Chekhov’s gun throughout the season. Will he wake up? And if he does, how will the Vatican handle having two popes at once? As you’d expect, a comatose pope inspires a cult following, adding another problem to the Vatican’s ever-growing list: financial corruption, rebellious nuns, the epidemic of child abuse scandals, and a looming threat from Islamic extremists.

Despite the Trumpian parallels of Lenny Belardo’s mercurial leadership, there was often a sense in The Young Pope that God was hiding just out of sight. Paolo Sorrentino’s glorious landscapes and witty tableaux reveled both in the luxurious beauty of the Holy See, and in persistent hints of the miraculous. We were encouraged to wonder if the cruel Pius XIII was an unlikely recipient of divine power. But God is absent from The New Pope, as the Vatican’s cynical Secretary of State, Cardinal Voiello (Silvio Orlando), orchestrates Brannox’s election as comfortably centrist new leader. Lenny Belardo’s egomania trod the border between sacrilege and messianic power, while Brannox talks more about human love than the thundering strength of God. Belardo railed at the Almighty with loud, accusatory, theatrically one-sided arguments, prostrating himself on the floor and raising his arms to the heavens. Brannox, self-contained, barely even prays.

The key question here is, of course: Is The New Pope as good as The Young Pope? The original series was so uniquely bizarre that it’s hard to imagine the sequel measuring up. And it doesn’t. The New Pope is still fantastic, but it’s largely a continuation rather than an advancement from what we saw before. John Brannox makes for a less dynamic protagonist than Lenny Belardo, and while The Young Pope was 10 perfect hours of television, the sequel suffers from the inclusion of a flawed, sexist subplot.

Season 1 introduced Esther (Ludivine Sagnier) as the unhappy wife of a Swiss Guard, devoted to Pius XIII after he seemingly cured her infertility. Since then, she’s fallen on hard times. Modeled on a kind of medieval morality play, the pious and sad-eyed Esther becomes a sex worker to support her child, hired by a wealthy old woman to sleep with her disabled son. Both seasons examine how the Church fails to help vulnerable people—particularly children and people with disabilities—but this subplot is ill-thought-out and kind of offensive. For starters, why is this lady shelling out €15,000 a night for the reluctant and inexperienced Esther, when a professional would do it better for a tenth of the price? Why do we never see the son’s perspective of this arrangement? The show shrouds him in darkness, a fairytale creature locked away in a tower. This troublesome storyline comes across as a clumsier version of Cardinal Voiello’s friendship with the disabled teenager Girolamo, who he uses as a kind of silent therapist under the guise of caregiving. Along with introducing another disabled character as a receptacle for metaphor, Esther’s arc just feels regressive and exploitative. At the risk of stating the obvious, this extremely Catholic show needs to chill with the virgin/whore imagery.

Sorrentino apparently can’t resist including nude scenes for every female character, regardless of whether it feels necessary. It’s one of several reasons why David Lynch kept coming to mind this season. Everyone loves to describe things as Lynchian, usually as a vague synonym for “hey, that was kinda weird,” but there’s some genuine overlap here. Both are auteur filmmakers who work in TV, preoccupied with soap opera tropes (comas, mysterious twins, secret affairs) and notably skilled at creating surreal, theatrical setpieces with distinctive soundtracks. Both tackle ugly, politically charged topics through a lens of stylized fantasy. And both have the capacity to be very sexist in their depiction of nubile young women.

Sex is a central theme this season, guided by the languidly seductive presence of John Brannox, clearly designed to be the polar opposite of his predecessor. Lenny Belardo was a working-class American orphan, while Brannox is an English aristocrat who lives with his parents on a massive country estate. Belardo was obsessed with the ancient, cloistered mystery of the Church, refusing to make public appearances or appease the Vatican’s PR manager Sofia (Cécile de France). Brannox is already a public figure, exemplified by a rather meanspirited running joke where Meghan Markle keeps texting him for fashion advice. (“She thinks I’m gay.”) He invites celebrities to the Vatican (Sharon Stone! Marilyn Manson!) and gives heartfelt speeches about love. And while Belardo was emphatically celibate and dedicated to cracking down on sexual activity among the clergy, Brannox is flirtatious from his very first scenes.

Considering the number of movie stars dipping their toes into prestige TV, the presence of John Malkovich or Jude Law no longer holds a unique sway. The Morning Show, for example, squandered the A-list potential of Reese Witherspoon and Jennifer Aniston. Genre vehicles like Carnival Row (Orlando Bloom) and See (Jason Momoa) are vacuous excuses to flush money down Hollywood’s toilet. The question here isn’t, “Will I watch this show for John Malkovich?” but “Is this show using John Malkovich for something interesting?” Clad in bespoke suits and sultry mascara, delivering Sorrentino’s trademark monologues in a luxuriantly posh English drawl, he’s a hypnotic presence. A worthy successor to the very different role played by Jude Law, whose spirit haunts us while his body lies comatose in Venice. The most impressive feat is making Brannox quietly sexual without seeming predatory, while the show grapples with the Catholic Church’s toxic relationship with sex. “What, no nudes?” he quips drily, after his first official photoshoot in papal robes.

Without God’s spectral presence or Lenny Belardo’s decisive leadership, the Vatican sinks into a quagmire of its own making. Season 1 reveled in the corruption and hypocrisy of the Church, to the point where you’d wonder why the hell Sorrentino was permitted to film in Vatican City. (He wasn’t: It’s all a stunningly accurate recreation in an Italian studio.) Now Voiello, the man behind the throne, is concerned with consolidating power during a time of upheaval. Nothing meaningful has been done about the plague of sexual abuse. Priests and nuns are having affairs with each other and with outsiders. The Church creates and spreads its own corruption, transforming loving relationships into sources of shame, self-loathing, and blackmail. At the center of it all, John Brannox is an oddly passive figure. The Pope’s chief aide, an odious blackmailer, phrases it poetically: “I will continue to deal with the stench of the body, and you with the perfume of the spirit.” Unlike last season’s tongue-in-cheek credits sequence where Pius XIII strolled past a gallery of Biblical art, The New Pope opens each episode with nuns performing a raunchy dance in front of a flashing neon crucifix, set to a song called “Good Time Girl.”

The New Pope turned out to be the horny, scandalous drama that people wrongly assumed The Young Pope to be—and in some ways this makes it feel more conventional than its predecessor. However, that doesn’t mean it’s conventional by the typical standards of American TV. The New Pope‘s satirical moments range from subtle to farcical, but they’re never glaringly direct. Its most effective punchlines and emotional cues often have more to do with cinematography (Luca Bigazzi) than dialogue. Mysteries are not necessarily meant to be solved, and any moral message is left to the audience’s interpretation. Many of Sorrentino’s most exciting creative choices have nothing whatsoever to do with plot. It really puts Netflix’s The Two Popes to shame, since that film sacrificed meaningful critique in favor of an upbeat ending. The New Pope’s surreal opulence is altogether more appropriate for the topics at hand, depicting sin and corruption alongside the compelling spiritual power of the Church.