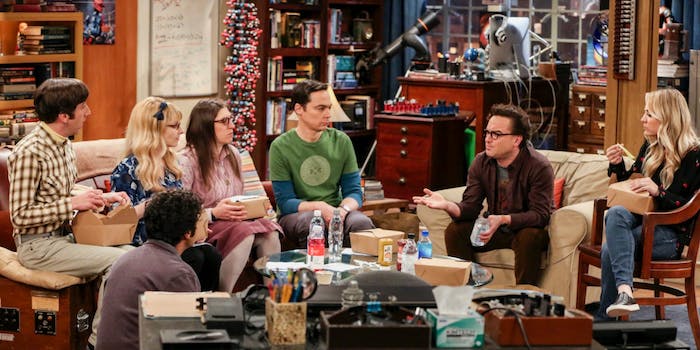 HBO Max eyeing ‘Big Bang Theory’ and ‘Two and a Half Men’ in $1.5 billion deal

'Seinfeld' could be next up in the sitcom bidding wars.

The streaming wars are just getting started, and the biggest battlefield yet is multi-camera sitcoms.

Rumors have emerged of a splashy deal for HBO Max, as the streaming service is circling a purchase of The Big Bang Theory and Two and a Half Men for a combined $1.5 billion. Deadline reports that a deal is approaching, as the company looks to solidify its streaming library ahead of its upcoming launch.

The two Chuck Lorre-produced multi-cam sitcoms proved massive hits during their original runs on CBS, and have already been a force in cable syndication. Logic dictates they should be massively popular as streaming properties as well.

This marks the second huge deal for HBO Max in recent months, as the service already paid $425 million for Friends, which has long been a Netflix centerpiece.

As Disney+ and HBO Max prepare to compete with Netflix, all three streaming giants are beefing up their back-catalogs with familiar titles that they wager customers deem essential.

While every streamer is producing new content, it is becoming increasingly clear that the companies see back-catalogs as a competitive key. The Office recently landed at NBCU, and rumor has it streaming services could wage a bidding war over Seinfeld in the near future. With its new acquisition of Fox, Disney is strategically deploying The Simpsons and Family Guy as it figures out what content will live on Hulu and what will live on Disney+.

Seinfeld‘s previous deal at Hulu was for $130 million, a number that feels like chump change in this new era of mega-deals for sitcom streaming rights.

It seems that the key to the future of streaming is going to be what company can best harness beloved content from the past.