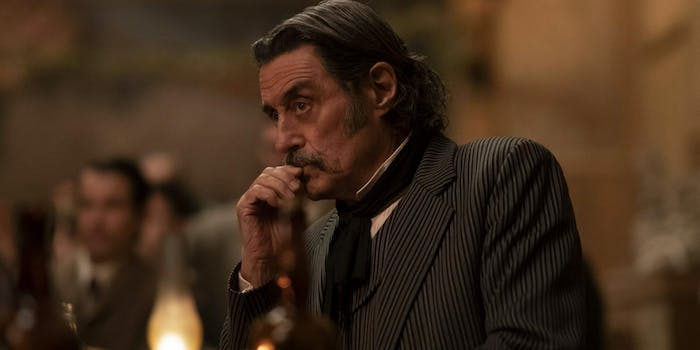 ‘Deadwood: The Movie’ is a fitting coda to the brilliant, messy series

It’s also got the best swearing you'll hear on TV.

Ask any big Deadwood fan and they’ll tell you the show has never gotten its due. The Western epic was canceled after three seasons, before creator David Milch could bring a proper end to his tale of fortunes won and lives lost during the Gold Rush. It also finished its run in 2006, at what now feels like a moment of transition in HBO’s history (not unlike the moment they are in right now). Still, Deadwood has cemented its status as one of the greatest TV shows of all time, its lawmen and cutthroats the logical extension of the Western genre’s masculine ideals, minus the clear-cut morality. That same moral ambiguity returns in Deadwood: The Movie, as does the show’s core ensemble, making it a worthy sendoff to a brilliant, messy series whose proper conclusion has been more than a decade in the making.

‘Deadwood: The Movie’ is a fitting coda to the show that somehow manages to avoid feeling like fan service.

A lot has changed in Deadwood since we last spent time here. The camp is more complete and less shoddy, contrasting with the noticeably older residents. Director Daniel Minahan—a TV veteran who’s worked on everything from Game of Thrones to Grey’s Anatomy and helmed a good portion of the original show—does a great job updating the setting and making it look more cinematic. The movie picks up 10 years after the show’s finale, as South Dakota gets ready to celebrate its official statehood. This occasion is marked by a visit from local land-holder, current California Senator, and season 3’s unchallenged villain, chief geologist George Hearst. Hearst’s arrival uncovers old scores in Deadwood that have yet to be settled, as well as a legacy of blood that runs as deep as the town’s foundation.

How this all resolves is satisfying, though not exactly tidy. The best TV finales tend to wrap things up in a fitting way without unnecessarily tying a bow on top, and by that measure, Deadwood: The Movie hits the mark. The film is unencumbered by unnecessary plot, but it does rely on a natural understanding of the characters. Quick flashbacks do their best to remind people what they’ve missed, but it’s still difficult to comprehend certain relationships without having seen the show first.

In fact, it’s hard to comprehend many of the relationships even having watched the show. Like most great characters, the residents of Deadwood are at their most interesting when they’re messy and acting against their own self-interests. Nowhere is this more evident than the orbit surrounding Ian McShane’s plotting, foul-mouthed saloon owner, Al Swearengen. In the beginning, Al was the villain to Timothy Olyphant’s heroic, stubbornly righteous Sheriff (now Marshall) Seth Bullock. But the movie reframes Bullock as the traditional hero and Al as the antihero. When we meet Al again, he’s older, beaten down, but still very much himself. Deadwood: The Movie does not let us forget the awful things Al has done. He’s redeemed, somewhat, but never redefined. The film reminds us that even while trying to create a better world, bad men will still do bad things. People change, Milch posits, but that doesn’t mean their better angels always win out.

McShane and Olyphant both get delightful, well-earned moments of grandstanding in Deadwood: The Movie, but the terrific Molly Parker gets short shrift as Alma Ellsworth. Ellsworth has the most transformative arc on the show, but her role in the movie is somewhat diminished. The film’s more sentimental moments are also surprising, though not unwelcome. More than anything, I am happy to report that in this age of nostalgia for nostalgia’s sake, Deadwood is not an unnecessary retread of former glories. Given how uncertain HBO’s future is, I suspected the film might play like a greatest hits piece, but thankfully, there’s more to it than that.

Deadwood: The Movie is not an unnecessary piece of fan service in the vein of so many recent TV reboots, nor is it a perfect substitute for the finale that viewers were deprived of more than a decade ago. Instead, the film functions as a worthy coda to a show that was never about “easy” endings. It may not stand up to scrutiny on its own, but taken in conjunction with the rest of the series, it’s hard to imagine being disappointed by what we get here.