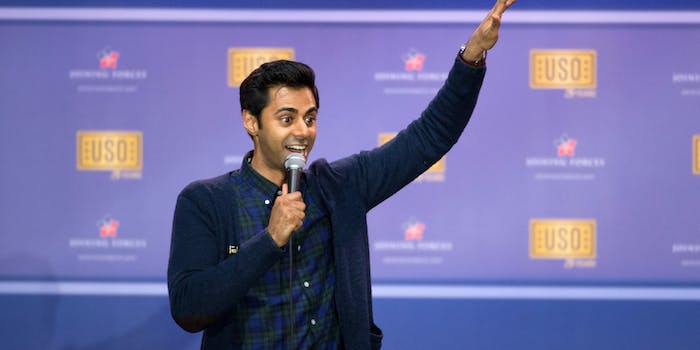 Trump has said he will not attend.

In a statement, WHCA president Jeff Mason praised Minhaj for his heart and dedication for freedom of the press.

“I am thrilled that Hasan will serve as our featured entertainer at this year’s White House Correspondents’ Dinner,” he said. “Hasan’s smarts, big heart and passion for press freedom make him the perfect fit for our event, which will be focused on the First Amendment and the importance of a robust and independent media.”

“It is a tremendous honor to be a part of such a historic event even though the president has chosen not to attend this year. SAD!” Minhaj said. “Now more than ever, it is vital that we honor the First Amendment and the freedom of the press.”

Mason explained Tuesday that he wasn’t looking for someone to “roast the president in absentia.”

While the comedian headlining the White House Correspondents’ Dinner is usually announced months in advance, this year’s arrived just under three weeks before the ceremony is set to take place. Bob Woodward and Carl Bernstein will present awards and speak to attendees. Even before Trump made his intent to skip the event known, some worried about the implications of journalists and federal officials rubbing elbows, particularly after Trump called the press the “enemy of the people.” Samantha Bee is hosting her own alternative White House Correspondents’ Dinner, also on April 29, to offer people the chance to properly roast Trump. Other media outlets, in the months leading up to the annual event, have canceled their own parties around the weekend.

Minhaj already has some experience roasting Washington, having hosted the 2016 Radio and Television Correspondents’ Dinner last June. He made fun of the media, John Kasich and Hillary Clinton, and called out the members of Congress who accepted money from the NRA in the wake of the Orlando shooting.

“I don’t know if this is like a Kickstarter thing, but if $3.7 million can buy political influence to take lives, if we raise $4 million, would you guys take that to save lives?” he asked.