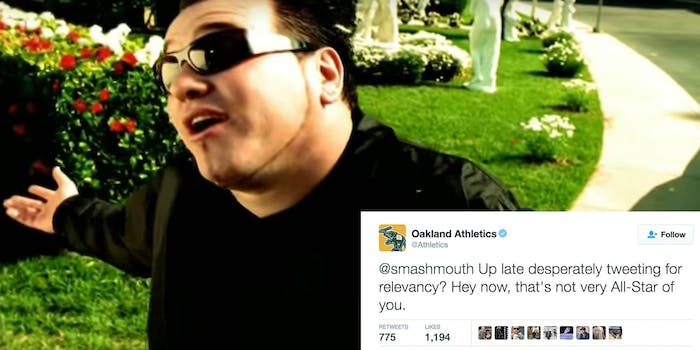 Get your game on. Go play.

Musical Guy Fieri cosplay outfit Smash Mouth just threw down on the Oakland A’s. Both were watching Game 3 of the World Series, which featured former Athletics player and current Cleveland Indians outfield Coco Crisp deliver big time. Crisp was responsible for the lone run that netted the Indians a victory and has them up 2-1 in the series. And it’s great to see a former A do the damn thing!

…Except not when you’re a bitter band from San Jose, a town with a shitty San Francisco Giants minor league team and with little hope of drawing a big league franchise to the cesspool of Silicon Valley.

It all started late Friday night with San Francisco Chronicle columnist John Shea serving up a fiery hot take on Crisp’s final stand with the A’s.

Coco Crisp goes from accusing A's of benching him to prevent $13M option from vesting to hitting key RBI single for Indians in World Series.

Smash and Mouth apparently weren’t having it, though they did congratulate Crisp on getting the fuck out of Oakland.

Naturally, the A’s took notice, fired up the grill, and roasted the hell out of the “All Star” band.

It’s worth noting that A’s pitcher Sean Doolittle also joined in the fun, delivering a few puns in the process.

hey hey guys cmon. Why Can't We Be Friends? last year was rough but I'm A Believer.

Smash Mouth was no match for this squad, striking out royally on Twitter. All while the A’s earned a few new fans in the process. Hey now.

Update 2:15pm CT, Oct. 29: It appears the A’s have apologized to Smash Mouth. Peep the green and gold olive branch:

Hey @smashmouth – sorry we let our competitive juices get the best of us. Tickets and a 1st pitch are on us anytime you're in the East Bay. pic.twitter.com/wfsKcBr1NW

If there’s not a Smash Mouth guy/Guy Fieri/Violent J bobblehead giveaway or a Shrek soundtrack-themed fireworks night in the works I’m burning my Rickey Henderson jersey.