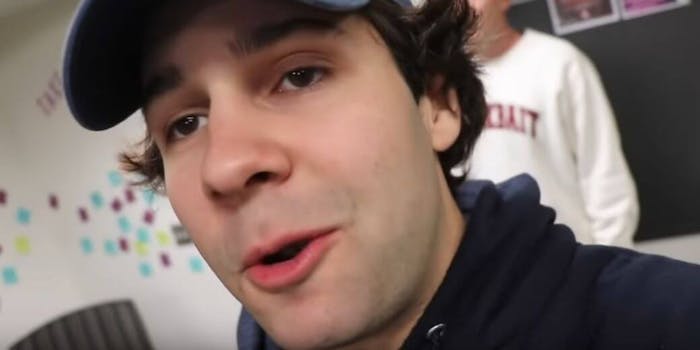 He said he made more while working as a waiter at a retirement home.

When YouTube’s so-called “adpocalypse” began in 2017, the amount of money a vlogger could make on the platform was severely compromised. Thanks to a number of YouTubers posting hate speech and racism, including PewDiePie’s sharing of Nazi imagery and jokes that cost him a contract with Disney, advertisers abandoned the platform. YouTube then unveiled new rules for how its users could get paid.

Even those who weren’t posting sensitive (or racially insensitive) content was hit hard by the “adpocalypse,” and some lost 80% of their income. That includes YouTube star David Dobrik, who revealed just how much his earnings dipped thanks to YouTube’s decision-making two years ago.

In a video interview with Men’s Health, Dobrik said he previously made $275,000 per month thanks to his YouTube videos. After the “adpocalypse,” Dobrik—who has 14.5 million subscribers—said that revenue dropped to $2,000 per month.

Dobrik said he previously earned about 60 million views per month and brought in slightly more than $275,000 a month.

“It literally felt like I was a drug dealer at that time,” Dobrik said.

Now, though, he’s earning more than three times as many views per month (about 200 million) and earning much, much less.

“It’s a huge difference,” Dobrik said in a wild understatement.

Dobrik’s earnings haven’t recovered in part because he uses copyrighted songs in his videos and because his channel is oftentimes inappropriate (for example, he recently stirred up controversy with a plane crash skit uploaded the day before the 9/11 anniversary).

“Right now, I’m making less money a month on YouTube than I was when I was waiting tables at a retirement home,” Dobrik said. “Which is pretty crazy.”

Dobrik said he could make his videos more age-appropriate and stop using copyrighted songs and his earnings would probably exponentially rise, but he said his videos wouldn’t have the same quality and it would lose the essence for “why the videos are mine.”