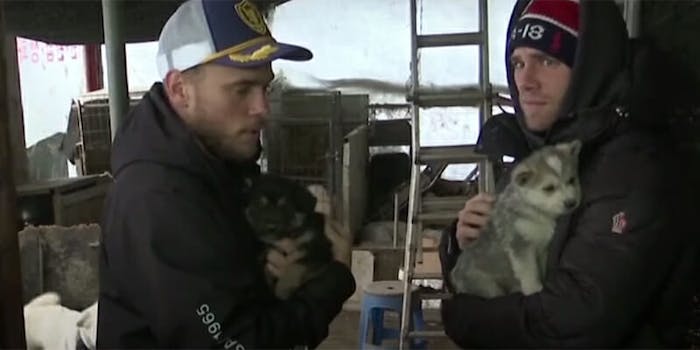 This is too sweet.

Freestyle skier Gus Kenworthy has been an active voice for the LGBTQ community during the Winter Olympics in Pyeongchang, South Korea. Today he stood up for the rights of another group in need of support: puppies. And he found one to bring home.

Kenworthy posted photos to Instagram on Friday, explaining that he and his boyfriend Matthew Wilkas made a “heart-wrenching” visit to a South Korean dog farm. In the caption, the athlete said they found the dogs they had been told were living in “good conditions” were actually malnourished, physically abused, and living in cramped, freezing quarters.

Kenworthy admitted it’s not his “place to impose western ideals” on Koreans, even when it comes practices he doesn’t agree with, like eating dogs. But, he wrote, “the way these animals are being treated, however, is completely inhumane and culture should never be a scapegoat for cruelty.”

Kenworthy said the farm they visited is, fortunately, being permanently shut down, and the 90 dogs living there will be placed with families in the U.S. and Canada. And even better news—Kenworthy adopted one of the pups himself. He and Wilkas named her Beemo.

“I’m hoping to use this visit as an opportunity to raise awareness to the inhumanity of the dog meat trade here in Korea and the plight of dogs everywhere, including back home in the U.S. where millions of dogs are in need of loving homes!” Kenworthy wrote.

The Olympian undoubtedly has a soft spot for rescuing animals. During the 2014 Winter Olympics in Sochi, Russia, Kenworthy fell in love with a group of stray puppies roaming the streets.