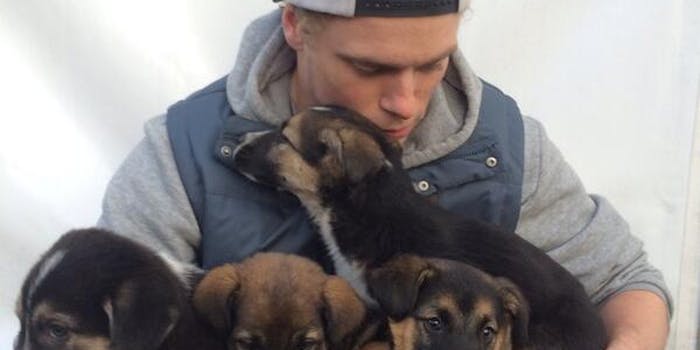 This Olympian rescued stray puppies in Sochi and won our hearts

Gus Kenworthy won more than just a medal in Sochi.

For one Olympian, a medal may not be the only thing he wins in Sochi.

Freestyle skier Gus Kenworthy already won the silver medal today as part of Team USA’s sweep in slopestyle skiing, but over the past few days he’s become one of the Winter Olympics’ biggest heartthrobs for what he’s doing off the slopes.

The stray dogs in Sochi made headlines after Olympic officials hired a pest control company to round up the thousands of dogs roaming the streets. Russian volunteers, hoping to save these dogs from that fate, have gone to smuggling them out of town.

Kenworthy stumbled upon one of the stray puppies while he wasn’t practicing for his events and couldn’t help but fall in love along with the rest of us.

Soon enough, more came up to him.

It’s one thing to take a photo with a bunch of stray puppies and leave them to their business or grim fate. It’s another to do something about it. He doesn’t know if he’ll be able to take them back home to Colorado, but damn if he’ll try his hardest.

When winning a medal in the Olympics isn’t enough, how about gaining a new family?