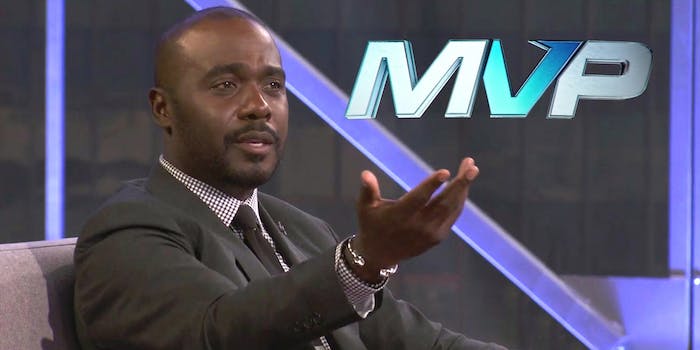 For the Hall of Famer, a new start on your phone.

The idea for how Marshall Faulk would spend his post-football life started well before his football career actually ended. Faulk, who was elected to the Pro Football Hall of Fame in 2011 after 12 standout seasons in the NFL, was a planner. When his athletic career was officially complete, he had a good idea of where he wanted to go next.

Faulk has served as an analyst for the NFL Network for the past half-decade, but the former running back, just like in football, has been known to pivot on his rushes and adjust on the fly in order to find a better way to move the ball forward. Although he’s in a traditional TV job—and that’s the media outlet where most of his fans see him now—he’s recently helped start jumpstart a new series called MVP on go90, Verizon’s mobile-only stream service.

When he retired after the 2005 season, Faulk probably couldn’t have foreseen the wave of digital technology changing the way so many people consume media, but his ability to adapt has served him well in his post-football life.

What Faulk is doing now is working on the internet’s answer to Shark Tank if the ABC hit was mediated by sports stars instead of ultra-successful business people. It’s led by Patriots star Rob Gronkowski, the most millennial of football players who perfectly understands how to use his image and antics to create viral moments for his online worshipers. And for Faulk—who, at the age of 43, is one of the oldest panelists on the show—the opportunity to move into the digital world was the right opportunity at the right time.

“If this was a show that was just on TV, the shelf life of it may not be as long or as good,” Faulk said. “But now, you can put it on a digital platform and get an audience to watch it whenever they want.”

The show is an interesting mixture of Shark Tank, a pro team’s locker room, and a mildly misbehaving frat house with a hint of late-night infomercial. On one of the first episodes, while an entrepreneur named Shica Little pitches the panel on her low-calorie whipped topping, Faulk, Gronkowski, NBA star Kevin Durant, and former NFL star Terrell Owens squeeze whipped cream directly into their mouths while peppering her with questions about where she would sell her product, its recent sales figures, and the company’s profit margins.

MVP, aka Most Valuable Partner, is an 18-part series with episodes ranging from 9-12 minutes, and it airs for free each Wednesday on the go90 app or on go90.com. Gronkowski is the star of the show, which also will include appearances by Olympic softball player Jennie Finch, jockey Victor Espinoza, and Steelers receiver Antonio Brown. Gronkowski is also a show producer, and it’s clear he’s thinking about life after football in the same way Faulk did more than a decade ago.

Faulk has learned from Gronkowski, as well. Sure Gronkowski is a party bro who happens to be the best tight end in the NFL. But he’s unquestionably become one of the most popular players at a position that, despite its name, isn’t traditionally a sexy spot for emerging superstars. And part of that is because he’s built a recognizable brand—both on the field and digitally—and Faulk got a close look at how Gronkowski and his brothers have turned their family name into a mini-empire.

Combine that with Faulk also listening to and learning from his children, aged 19 and 21, and it’s easy to understand the appeal of the show and the platform for Faulk.

“My kids help me to understand where today’s generation is,” Faulk said. “The fact that everything is right at their fingertips; everything they need, they can access it on their phone or iPad. It’s right there. When you watch how kids operate, they’re not pulling up the TV Guide to find out where stuff is. They find it on [their device], they press play, and that’s it.”

Faulk is fully on board. He realizes his impact digitally might be just as important as his appearances on national TV. He couldn’t have known that in 2005, but he realizes it now.