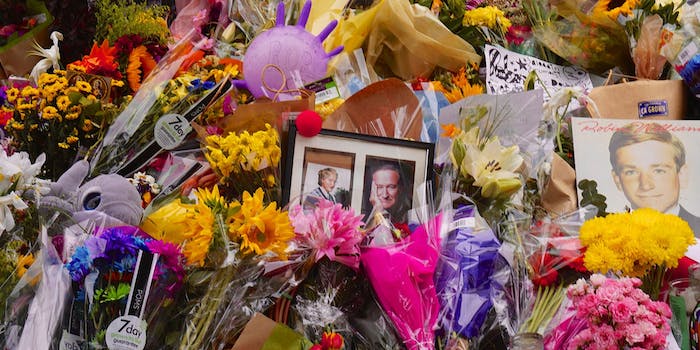 The Daily Dot pays tribute to those who died this year, from Robin Williams to Shirley Temple.

As we bring 2014 to a close, the world is without a few of its brightest stars. From entertainment and fashion to sports and politics, these 30 celebrities took their last spin around the Earth, leaving countless family members, friends, and fans to mourn their loss. Perhaps the most shocking 2014 death was that of actor and comedian Robin Williams, who committed suicide in his California home at the age of 63.

As Zaron Burnett III wrote for the Daily Dot afterward, “We used the Internet to democratize the meaning of his death.” And so, in turn, and in order to commemorate their many contributions to society at large, here is a GIF tribute to some of those shining stars whom we lost over the past 12 months.

Ariel Sharon was a decorated member of the Israeli army before ascending through the political ranks to become the country’s 11th Prime Minister. He held the title from 2001 until 2006, when a stroke incapacitated him.

Pete Seeger was a folk musician and activist whose career spanned decades. His musical legacy includes tunes like “If I Had a Hammer” and “Goodnight, Irene,” while his activism led him everywhere from the McCarthy hearings in the 1950s to Occupy Wall Street.

The sudden death of acclaimed actor Philip Seymour Hoffman rattled Hollywood and raised awareness of the dangers of drug overdosing. Hoffman won audience and critical acclaim for roles in fare such as Capote (in which he played the title character), Boogie Nights, Almost Famous, and cult favorite The Big Lebowski.

Shirley Temple was a renowned child star in the 1930s and 1940s, best known for roles in Heidi and Curly Top. Later on in life, she found success in politics and became the U.S. Ambassador to Ghana in the 1970s and Czechoslovakia in the late 1980s and early ’90s.

Comedic genius Sid Caesar began his lengthy showbiz career during the Golden Age of Television as a member of Your Show of Shows. He worked with Mel Brooks on several films, including History of the World Part I and Silent Movie, and also appeared in Grease, Cannonball Run, and Vegas Vacation.

Pastor Fred Phelps made an ugly name for himself as the founder and head of the extremist Westboro Baptist Church in Kansas. The church, which is infamous for spewing vigorous bigotry and protesting the funerals of soldiers killed in action, excommunicated Phelps roughly a year before his death.

James Rebhorn was a character actor who appeared in numerous movies and television programs. He had supporting roles in films like Meet the Parents and Independence Day and regular roles on series like White Collar and Homeland.

Mickey Rooney was one of the most successful actors in Hollywood, bursting onto the scene as a child star in the 1920s and never stopping. Later on in life, he would again find success on Broadway and in films like the Night at the Museum franchise.

Professional wrestler The Ultimate Warrior was one of the most successful personalities during the sports heyday in the 1980s and 1990s. He won the WWF Championship title in 1990 by pinning Hulk Hogan eight years before his retirement.

Bob Hoskins was one of Hollywood’s most well-respected actors, appearing in classic dramas like The Long Good Friday and Mona Lisa. He was also celebrated for his roles in more lighthearted pictures, such as Mermaids, Hook, Who Framed Roger Rabbit, and, of course, the universally panned Super Mario Bros. movie.

Maya Angelou was a poet and author whose work reflected her experiences and struggles as a woman of color. She is perhaps best known for her autobiographical work I Know Why the Caged Bird Sings.

Rik Mayall was one of the U.K.’s most beloved comedians and comic actors. Appearing in British comedy programs like The Young Ones and Blackadder, he also made a name for himself in the United States starring alongside Phoebe Cates in Drop Dead Fred.

Casey Kasem was a radio DJ who hosted the countdown program American Top 40 for almost four decades. Additionally, he was an accomplished voice actor, with his most famous role being that of Shaggy in the cartoon series Scooby-Doo.

Eli Wallach was a staple of Hollywood cinema, hitting his stride in the 1960s with roles in The Good, the Bad, and the Ugly and The Magnificent Seven. He also played Mr. Freeze in the original live-action Batman TV series with Adam West. He kept active well into his 80s and 90s, appearing in the third Godfather installment and Wall Street: Money Never Sleeps.

Drummer Tommy Ramone was one of the founding members of The Ramones, which helped define the punk scene in the U.S. and U.K. throughout the 1970s. He was preceded in death by his fellow original Ramones Dee Dee, Johnny, and Joey.

Blues musician Johnny Winter rose to prominence throughout the 1960s and 1970s, winning fans with his signature brand of high-energy blues. The long-haired guitarist performed with the likes of Janis Joplin, Eric Clapton, and Muddy Waters during his lengthy career.

Elaine Stritch was a staple of Broadway, appearing not only in her Tony Award-winning one-woman show Elaine Stritch at Liberty, but also Company and Sail Away. She also appeared in movies and TV series, notably as Jack Donaghy’s (Alec Baldwin) controlling mother in 30 Rock.

Deep-voiced and handsome, James Garner made his name on TV with starring roles in The Rockford Files and Maverick, having also appeared in the 1993 Mel Gibson movie adaptation of the latter series. In film, he achieved roles in The Great Escape, Victor Victoria, and The Notebook.

The death of Robin Williams was easily the most shocking and sad celebrity death of 2014. Williams’ August passing ended a decades-long career in timeless comedy and drama films, ranging from Mrs. Doubtfire to Aladdin to Good Will Hunting. His death, which was ruled a suicide, raised awareness of depression in general and particularly how it affects comedians. Online, he was immortalized with a character in World of Warcraft, one of his favorite games to play.

Classic film star Lauren Bacall enjoyed a lengthy showbiz career, with signature roles in several Humphrey Bogart films in the 1940s. She continued to win acclaim as time went on, receiving award nominations for her role in The Mirror Has Two Faces in 1996.

Sir Richard Attenborough was a fully accomplished actor on the London stage and in films. He is perhaps best known by younger readers for his roles as Kris Kringle in Miracle on 34th Street and John Hammond in the first two Jurassic Park movies in the 1990s.

One of the first and still best-known female comedians, Joan Rivers trained alongside the likes of Don Rickles, Rodney Dangerfield, and Richard Pryor during the medium’s golden age in the 1970s. Later on in life, she would appear in films, including Spaceballs, and hosted Fashion Police alongside her daughter Melissa at various red carpet events in Hollywood. Just months before her death, she caused a stir when she walked off the set during a CNN interview.

Richard Kiel was a character actor who played Jaws in several James Bond films in the 1960s and 1970s. He was introduced to a new generation of fans as the larger-than-life Mr. Larson in Adam Sandler’s Happy Gilmore.

Polly Bergen began her showbiz career in the 1960s with roles in films such as The Caretakers and the first film adaptation of Cape Fear. Later on in life, she would author several books, appear in commercials, and enjoy roles in series like Desperate Housewives and The Sopranos as well as the John Waters film Cry-Baby.

Jan Hooks got her start in the 1980s as a cast member of Saturday Night Live; on the program, she impersonated figures such as Kathie Lee Gifford and Hillary Clinton and, alongside Nora Dunn, portrayed one half of the obnoxious singing duo the Sweeney Sisters. She also appeared in a number of films, most notably as an overly perky Alamo tour guide in Pee-Wee’s Big Adventure.

Elizabeth Peña first won acclaim for her acting work in the 1980s alongside Lou Diamond Phillips in La Bamba. Later on in life, she had a recurring role as Pilar in the comedy series Modern Family.

Fashion designer Oscar de la Renta was responsible for a long, successful line of high-end apparel, housewares, and fragrances. He made his name in the 1960s as the dresser of First Lady Jacqueline Kennedy.

Ken Weatherwax enjoyed a brief but timeless career as Pugsley in the 1960s live-action adaptation of The Addams Family. He and the other two surviving cast members, John Astin (Gomez) and Lisa Loring (Wednesday), spent their later lives making appearances at events and in documentaries detailing the program.

Grammy-winning Joe Cocker enjoyed a 50-year career in the music business. Best known for the hit singles “You Are So Beautiful,” “With a Little Help From My Friends” (which was adapted as the theme song to the 1980s TV series The Wonder Years), and “Up Where We Belong,” he was also renowned for his spastic on-stage performances.

Update 2:46pm CT, Dec. 31: After the publication of this article, the entertainment world has suffered two additional tragic losses: Christine Cavanaugh (the voice of Chucky on The Rugrats) and Edward Herrmann (the beloved patriarch of Gilmore Girls).