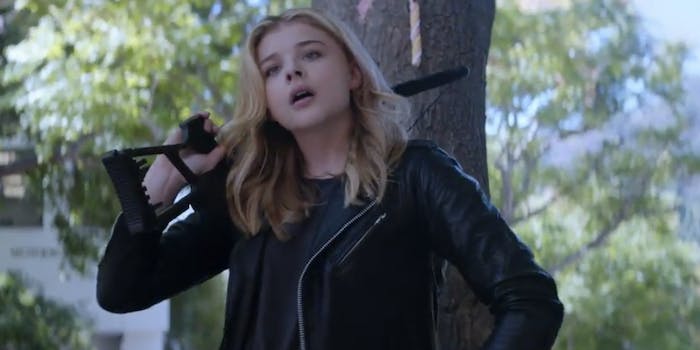 Plus the obligatory Michelle Obama cameo.

To paraphrase typical film trailer speak, “In a world where comedy is the message, no topic is safe or sacred.”

Or so believes Funny or Die. In its latest movie promo spoof, Snackpocalypse, one of filmdom’s new young stars, Chloë Grace Moretz (Kick-Ass) takes on sci-fi thriller Divergent using a school’s battle between junk food snacks and healthy goodies as the plot tension. Moretz is the reluctant heroine who attempts to save her classmates from a slovenly, lethargic future by taking on the healthy food snack machine with a crossbow to unleash its nurturing goodness.

It’s not one of Funny or Die’s more classic skits, as it drags on a bit, and unless you are familiar with the nuances of the Divergent plot, Snackpocalypse comes off as an off-base lampoon of either The Walking Dead or The Hunger Games. Come to think of it, perhaps The Hungry Games would have been a better (or at least punnier) title for this video.

First Lady Michelle Obama has a predictable cameo at the end of the clip. Seems like the First Lady’s one-woman-campaign to inspire healthy eating is a bit tired five and a half years into her husband’s term.