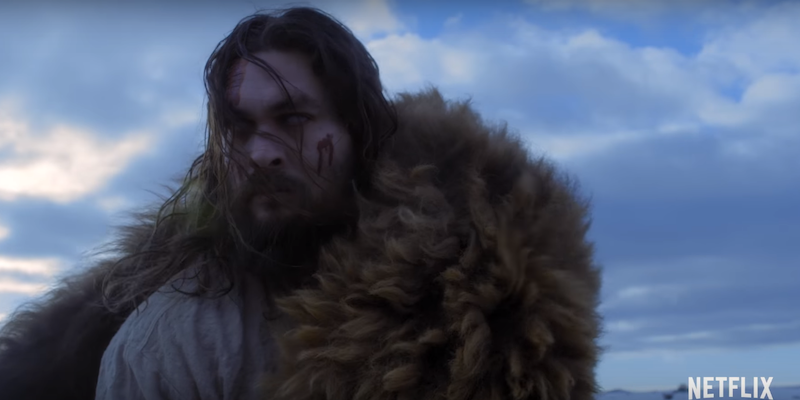 The action and shifting loyalties turn up the heat in season 2.

As season 2 of Netflix’s Frontier opens up, the half-Irish, half-Cree outlaw Declan Harp (Jason Momoa) is in rough shape. Having survived his own attempted hanging, he’s swiftly escorted northward by allies and left to recover among the Inuit. But while the peaceful life he finds among a kindly father and son holds a certain appeal, the desire for revenge against the man who killed his family is too strong, and Declan is soon making his way back toward Fort James, in search of vengeance. Unfortunately, there’s a bounty on his head, so Declan sets out to recruit new allies in his war against the Hudson Bay Company.

A co-production between Netflix and Discovery Canada, Frontier has leveraged Momoa’s presence—in both uses of the word—to pitch itself as a sort of 17th century Game of Thrones, but with the politics of Westeros swapped out for the battle over the North American fur trade. The advertising has leaned heavily on shots of a blood-streaked Momoa wading into battle, axes in hand. But, especially in the show’s leisurely paced first season, this wasn’t really the case. There were certainly moments of action and even of brutal violence, but that was the exception rather than the rule.

Season 2 strikes a better balance between its disparate elements, and also makes considerably better use of Momoa. Momoa has talked about how season 2 gave him more to do, and it also finds more interesting ways to use him. While he gets several chances to cut loose and be a badass, the show often undercuts Momoa’s imposing physical presence by either placing him up against a more capable opponent (a hulking Russian bounty hunter mops the floor with him repeatedly) or by simply underlining the fact that Declan might look impressive, but he’s neither immortal nor invulnerable. In fact, Declan both begins and ends this season in dire shape, he’s captured several times, and his most memorable scenes involve him being clever rather than just flexing his way past his problems.

However, Frontier has never just been about Momoa—marketing strategies notwithstanding—and season 2 better handles its large supporting cast this time around as well. While the Game of Thrones comparisons are easiest when tied to Momoa’s presence and the sporadic gory fight sequences, the meat of the show is actually much like the meat of HBO’s fantasy juggernaut. In the world of Frontier, control of the fur trade is as sought after as the Iron Throne, and watching the various machinations and schemes to either defend or unseat the Hudson Bay Company’s monopoly over the trade makes for much more enjoyable viewing in this sophomore season.

Some standouts from season 2 include the devious Elizabeth Carruthers (Katie McGrath), who works every angle in the playbook to try and ensure the ascendancy of the fur company she inherited from her husband; Evan Jonigkeit as the power-hungry Captain Chesterfield; Zoe Boyle as tavern owner Grace Emberly, who’s forced into a partnership with Chesterfield, whom she detests; and personal favorite Greg Bryk as flamboyant sociopath Cobbs Pond—I’d watch an entire show about this character alone.

Shifting loyalties and alliances define the season and set things up for a potentially even better third season, should that happen. The show still has some pacing issues and remains less than the sum of its parts, but season 2 is a marked improvement over the first run. Frankly, you could easily get away with just starting your viewing here.