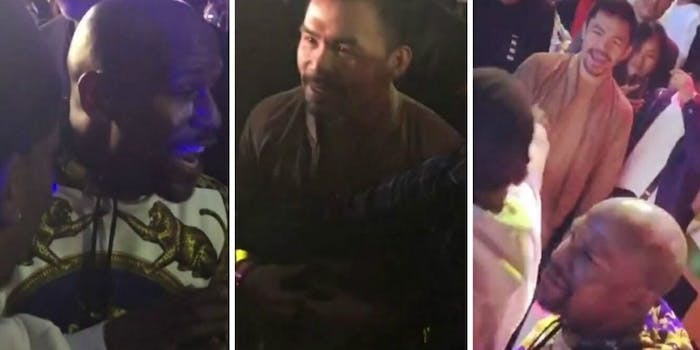 The video is intense.

Boxing megastar Floyd Mayweather got into a verbal confrontation with rival Manny Pacquiao on Saturday, and now, the best boxer of his generation said he’s going to end his retirement to face Pacquiao for the second time.

“I’m coming back to fight Manny Pacquiao this year. Another 9 figure pay day on the way,” Mayweather wrote on Instagram. Here’s the video he posted on his Instagram account, which has 21.1 million followers.

I’m coming back to fight Manny Pacquiao this year. Another 9 figure pay day on the way @mayweatherpromotions

Here’s another view of their encounter at a Japanese music festival.

The timing on all of this is interesting, because the biggest fight of the year—a rematch between middleweights Canelo Alvarez and Gennady Golovkin—is occurring Saturday night in Las Vegas. The fact that Mayweather uploaded the footage on the same day probably isn’t coincidental. After all, Mayweather loves media coverage, and if the attention can be turned on him for a little while instead of Alvarez and Golovkin, Mayweather will gladly take it.

Mayweather and Pacquiao fought each other in 2015 in the richest fight in boxing history. Mayweather earned about $250 million for his unanimous decision victory against Pacquiao, who reportedly took home about half of Mayweather’s earnings.

Mayweather also likes creating a stir on social media. He recently savaged 50 Cent on Instagram, he constantly posts advertisements for his Las Vegas gentleman’s club and his (successful) sports betting slips, and he and UFC star Conor McGregor nearly broke the internet when they battled last year.

If the fight with Pacquiao were to happen, it’d most likely the mirror the $99 pricetag we saw for their first fight—a cost that really pissed off Axl Rose. But more than likely, this is just another publicity stunt for Mayweather, who certainly enjoys keeping himself relevant on social media (and poses for photos with the likes of YouTube star Jake Paul) even if he has no intention of actually stepping back into the ring.